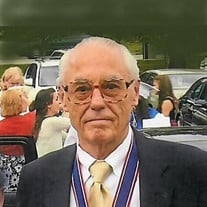 Dr. Dallam, Richard Duncan, 95, of Louisville passed away on July 2, 2021. Duncan was born December 12, 1925 in Kansas City, MO, where he attended Southeast High School and was an Eagle Scout. He attended William Jewel College in Liberty MO, before enlisting in the Army Air Force Cadet Corps at 17 years of age. He was a decorated Veteran of WW II. As a B-29 tail gunner stationed on Tinian, his 21' and last bombing mission over Japan occurred on August 14, 1945. Because Japan had not surrendered unconditionally after the two A bombs were dropped, on that date, 820 B-29's, over a 24-hr. period, to bomb the Empire. On the morning of August 15th Japan surrendered unconditionally, it was the largest and the last bombing mission of WW II. After WW II. Duncan attended Rockhurst College in Kansas City, MO, and University of Missouri, in Columbia, MO. After receiving his Masters Degree in 1950, as a 2nd Lt. in the USAF Reserve, in 1951 he was called to active duty during the Korean war. He later attained the rank of captain in the Army Medical Service Corps Reserves during the Vietnam conflict. Duncan received his Ph.D. in Biochemistry from the University of Missouri in 1952 and in 1953 he joined the Department of Biochemistry at the University of Louisville School of Medicine. He did post graduate work at the Massachusetts Institute of Technology and the Rockefeller Institute. As a National Institutes of Health Fellow and a Commonwealth Fellow, he was a Visiting Professor in the Biochemistry Department at University of Leicester in England from 1966-1967. He taught students in the Medical, Dental and Graduate Schools at the University. Dr. Dallam retired after 40 years of teaching and conducting research in the Department of Biochemistry and Molecular Biology as professor emeritus in 1993. His research on Intermediary Metabolism was acknowledged in 1961 by the American Heart Association who designated him as an Established Investigator of the American Heart Association. He was a founding member of The Biophysical Society, as well as a member of the American Society for Biochemistry and Molecular Biology. He was a member of the social fraternity Kappa Alpha and was an honorary member of the Phi Chi Medical fraternity. Duncan and his wife Ginny were married in June 1951 and later owned farms in Lagrange and Simpsonville, Ky. where for 25 years they raised cattle and Quarter horses. They also showed their ponies hitched to an Amish farm wagon for several years in the Derby Parade and in many other regional parades. He was a life time member of the Downtown YMCA. Dr. Dallam was preceded in death by his parents, his brother John Paul Jr. all from Kansas City MO, his wife of 51 years, Virginia (Ginny) Crump Dallam and sons Gregory Paul Dallam and Eric Duncan Dallam. Survivors include his wife, Susan Lacewell Clements, and grandchildren Elizabeth Danielle and Jack Lewis Dallam in Louisville and Lillian Moore of Fenton, MO. The funeral will be private. Burial of his ashes will be with his wife Ginny's ashes in the Veterans National Cemetery, New Albany, IN

The family of Dr. Richard Duncan Dallam created this Life Tributes page to make it easy to share your memories.

Dr. Dallam, Richard Duncan, 95, of Louisville passed away on...

Send flowers to the Dallam family.