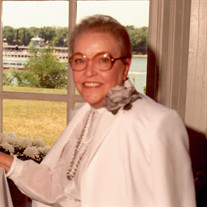 Rebecca Heckler went to God on June 11, 2019 at the age of 90 years. She was born on April 24, 1929 in Perry, Georgia. Rebecca worked most of her life starting in her father’s peach farm store where she fell in love with business. She worked in Memphis in the mid- Fifties managing a local record store, ''Wink's Wax Works". She worked for Tandy Company where she honed her love of color and cloth, always maintaining perfection in her appearance. She worked in State Government in the Communications, Treasurer and Transportation offices. Rebecca always tried to help everyone she met. Once retired, Rebecca poured her efforts into helping retirees through activities with the Kentucky Public Retirees (KPR) organization. Rebecca relished working the Kentucky Derby on Derby day and served for many years as a poll worker. Rebecca was very active in her community; Past president of BPW, Served as a member of East Jefferson, St. Matthews Business and Professional Women’s Association. She was a Member of the Methodist Church St. Matthews and a member of Kentucky Public Retires. Served in several capacities with Needlearts of Kentucky developing her own needle art books. She received several awards for her work and was honored to have her needle art hang in the Kentucky State Capital. Rebecca was preceded in death by her beloved parents, Felix Lewis Hammock and Rebecca S. Smith Hammock, one sister and four brothers. She is survived by one brother, Ed Hammock, nephews; Raymond Leslie Hammock, W. Randall Hammock (Kathy), C. Stuart Hammock (Paula), a niece, Audrey Elaine Jackson (Bob), along with several other nieces and nephews, great-nieces and great-nephews, and innumerable friends considered as her extended family across the Commonwealth and the Country. There will not be a service per Rebecca's directions as Rebecca had a gala celebrating her 90th Birthday as her last hurrah where she was honored to share her day with many of her closest friends and family. In lieu of flowers, contributions may be made to: Shepherd Center Foundation "Multiple Sclerosis Center", 2020 Peachtree Rd NW. Atlanta. GA 30309, Center for Women & Families, PO Box 2048 Louisville, KY 40201-2048.

Rebecca Heckler went to God on June 11, 2019 at the age of 90 years. She was born on April 24, 1929 in Perry, Georgia. Rebecca worked most of her life starting in her father&#8217;s peach farm store where she fell in love with business. She... View Obituary & Service Information

The family of Rebecca Heckler created this Life Tributes page to make it easy to share your memories.

Send flowers to the Heckler family.