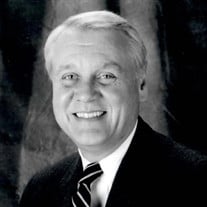 Raymond Kendrick “Rick” Guillaume, age 78, passed away peacefully Friday, March 11, 2022, after nearly a decade of multiple health issues. Rick was born in Louisville on June 19, 1943, the only child of William Raymond Guillaume and Marguerite Lyons Guillaume. Rick was a graduate of Shawnee High School class of 1961 and continued his education at Western Kentucky University graduating in 1965 with a Bachelor of Science degree in Business Administration. He was a prominent Louisville banker, a leader in the community, a dedicated and loving husband, father, grandfather, great grandfather and mentor to many throughout his life. His banking career began at Liberty National Bank/Banc One where he served as president. He also served as vice-chairman and CEO of Bank of Louisville which became BB&T. He ended his banking career as chairman and CEO of Kentucky Operations for BB&T. Throughout his banking career, he was known for his honesty and ability to help others realize their potential whether by mentoring an employee or making a loan to a client. Rick received many awards throughout his life including the Significant Sig Award that recognizes those alumni members whose exemplary achievements in their fields of endeavor have brought great honor and prestige to the name of Sigma Chi. He was inducted into the Shawnee High School Hall of Fame, he won the Metro United Way Society Leadership Award and was a Western Kentucky University “Westerner of the Year”. He also served on many boards, oftentimes as chairperson, throughout his life and most recently served on the boards of Norton Healthcare, West End School where he was a co-founding board member, and the Kentucky Performing Arts. Other civic boards included Metro United Way, The Red Cross, Fund for the Arts, Spirit of Louisville Foundation, The Healing Place and Western Kentucky University Foundation. Rick always felt that he had been very blessed and, therefore, had a great desire to give back to his community. Most of all, Rick loved his family. When his children were young, he could be found coaching their ball teams, with his suit pants rolled up after a full day’s work. With fondness, each grandchild remembers their special trip to New York, at the age of 13, with Grandpa and Grandma. Rick had big plans to pamper his five great grandchildren. His happiest moments were those when his entire family was gathered together. Rick also enjoyed a great game of softball with a special group of senior men named “The Boomers”, where he was the pitcher and when not pitching, he played third base. By the way, he had an outstanding batting average. To quote a friend of Rick, “He always lifted others up” whether it was greeting them as a faithful usher at his church, making a loan to them at the bank or simply listening to them over lunch. He always had a smile and a kind word for those he encountered. Another friend is quoted as saying, “The Shawnee Community lost a giant last night when Rick Guillaume passed away. A true leader in Louisville’s business community, Rick was a champion of education, the arts, religious and service organizations and all things sports. He will be missed. May he rest in peace.” His memberships included Christ Church United Methodist, Louisville Country Club and The Pendennis Club. Rick was preceded in death by his parents and his uncle, Kenneth L. Guillaume. He leaves to cherish his memories, his loving wife of 56 years, Ann, his son, Lee Kendrick Guillaume (Marla), his daughter, Jill Guillaume Kissel, grandchildren, Andrew Kendrick Guillaume (Ariana), Erika Ann Leet (Patrick), Connor Nicholas Kissel, William Joseph Kissel, great grandchildren, Julian Stonewall Leet, Andrew Kendrick Guillaume, Jr., Caroline June Guillaume, Stella Layne Guillaume, Margot Michelle Leet and his beloved Cavachon, Lacey. Visitation 3-7 PM Sunday, March 20, 2022, Pearson’s, 149 Breckinridge Lane. Celebration of Life 11 AM Monday, March 21, Christ Church United Methodist, 4614 Brownsboro Road. Burial to follow at Cave Hill Cemetery. Memorial gifts: Western Kentucky University Opportunity Fund, College Heights Foundation, 292 Alumni Avenue, Bowling Green, Kentucky 42101, or West End School, 3628 Virginia Avenue, Louisville, Kentucky 40211, or Christ Church United Methodist, 4614 Brownsboro Road, Louisville, Kentucky 40207. Arrangements under the direction of Pearson’s,"Where Louisville Goes To Remember".

The family of Raymond Kendrick "Rick" Guillaume created this Life Tributes page to make it easy to share your memories.

Send flowers to the Guillaume family.