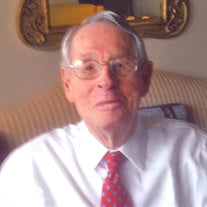 Ralph Mason Scott, M.D. 97, of Louisville, KY, died August 15 at his home. He was born to the late Benjamin T. and Hazel M. Scott on November 23, 1921 at Lee Mont, Virginia. After graduating from Parksley (Virginia) High School, Ralph enrolled at the University of Virginia, but due to interruption by WWII did not graduate until the Fall of 1947. During the War, Ralph served in the Navy as a landing boat officer on an assault transport. He was involved in the landings on Iwo Jima, Okinawa and in the initial occupation of Japan. Ralph entered the Medical College of Virginia in 1946 and received an MD in 1950. During his first year of Medical School, Ralph married Alice Francisco, a union which would last until her death in 2013, and which produced three children – Susan, Ralph, Jr. and John. In 2015, Ralph married Dr. Betty Wolfe Long. He is survived by Betty, and her children Leslie Olson (Ray), Beth Long (David Dearner), Glenn Long (Denise), and by his daughter Susan Scott, his son John Scott and daughters-in-law Ann Torres and Eun Mi Yu. Before coming to Louisville, Ralph did a radiology residency at the Robert Packer Hospital and Guthrie Clinic in Sayre, PA. Then, further residency in radiation therapy at the University of Chicago and The Christie Hospital and Holt Radium Institute in Manchester, England. Professionally, Ralph has held many academic positions including Assistant Professor of Medicine at the University of Chicago, Professor and Chair in Radiation Oncology at the University of Louisville, Professor and Chair at the University of Maryland, Clinical Professor of Radiology at the University of Cincinnati, and Professor Emeritus of Radiation Oncology at the University of Louisville. He also served on the staff of Christ Hospital, Cincinnati, at the National Cancer Institute as Program Director for Radiation Therapy in the Division of Cancer Research, Resources and Centers, and as the first Director of the James Graham Brown Cancer Center in Louisville. He was a member of many radiological societies and served on the American Board of Radiology where he was President from 1972 through 1974. He has served on many boards including Dayspring, LADD and Seven Counties Services. A scholarship has been endowed in his name at the Virginia Commonwealth University School of Medicine. Memorial service will be held a 12pm on Saturday, August 24, 2019 at Pearson’s, 149 Breckenridge Ln. with burial to follow at Cave Hill Cemetery. Visitation will be from 10 a.m. until the time of the service on Saturday, August 24, 2019. In lieu of flowers expressions of sympathy can be made to the James Graham Brown Cancer Center ( 529 S. Jackson Street Louisville, Kentucky 40202)

The family of Ralph Mason Scott MD created this Life Tributes page to make it easy to share your memories.

Send flowers to the Scott family.