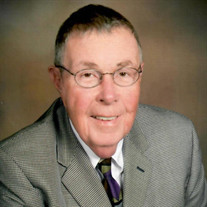 Powell, Ralph Eugene February 17, 1948- May 23, 2021 It is with great sadness, we announce Ralph Eugene Powell of Louisville, KY passed away at age 73 after a courageously fought battle with Alzheimer's Disease. Ralph was a loving husband, father, grandfather, uncle, and friend. His memory will be cherished by his wife of 29 years, Carol Powell; his children, Sarah Yaary (Dan), and Brett Eades (Faye); and his 4 grandchildren: Harrison Eades, Ellie Eades, Isabelle Cassada, and Calvin Cassada. Ralph was preceded in death by his mother, Mary Lehe Jones, his stepfather Ray Jones, and his sister, Nancy Powell Dahm. Ralph was born in Mahanoy City, PA. His family moved to Edgewood, MD when he was a small child, where he lived until leaving to attend Tulsa University on an academic scholarship. While at Tulsa, he was a member of the ATO Fraternity. He and some of his fraternity brothers played in a band, Little Calvin and the Mistakes; they never went on tour. Ralph's corporate career following graduation led him to live in multiple cities across the country. To quote Ralph, he knew he had found his "forever home" when he moved to Kentucky in 1989. Ralph was a faithful beloved member of Christ Church United Methodist, where he volunteered in many roles, including president of the Friendship Sunday School Class and church treasurer. Ralph was a member of Hunting Creek Country Club, where he played golf, a game he took up late in life, but truly loved. To all who knew him, Ralph was a kind, gentle, loving man who never met a stranger. His love of entertaining and socializing was only rivaled by his love for family and friends, the light of his life being his four grandchildren. Funeral service will be held 11 AM Wednesday May 26, 2021 at Christ Church United Methodist, 4614 Brownsboro Road Louisville, KY 40207. A Celebration of Life will follow service at Hunting Creek Country Club, 6807 Foxcroft Road Prospect, KY 40059. Visitation 4-7 Tuesday at Pearson's,149 Breckenridge Lane. Memorial donations may be made to, Christ Church United Methodist 4614 Brownsboro Rd. Louisville, KY 40207 Or Wesley Manor Retirement Community 5012 E Manslick Rd Louisville, KY 40219.

Powell, Ralph Eugene February 17, 1948- May 23, 2021 It is with great sadness, we announce Ralph Eugene Powell of Louisville, KY passed away at age 73 after a courageously fought battle with Alzheimer's Disease. Ralph was a loving husband,... View Obituary & Service Information

The family of Ralph Eugene Powell created this Life Tributes page to make it easy to share your memories.

Send flowers to the Powell family.