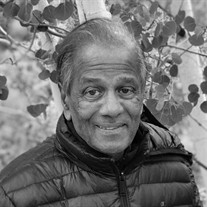 Rajanathan (Rajah) Karalakulasingam, 86, of Louisville, KY, passed away peacefully on the 29th of November, 2021 surrounded by loved ones, after a prolonged battle with cancer. Rajah was born on the 3rd of July, 1935 to Faith Rasamallikai Samuel and Thambipillai Albert Karalakulasingam in Kandy, Sri Lanka. After Rajah graduated from Trinity College, Kandy, he pursued medicine at the University of Ceylon. After graduation in 1966, he took a long cruise from Sri Lanka to London to advance his medical studies at the Royal College of Physicians, London, United Kingdom, attaining his MRCP, with a subsequent fellowship in Nephrology at St. Mary’s Hospital, London. He moved to the United States in 1972 to teach at the University of Louisville, and later moved into private practice. Rajah was very passionate about Internal Medicine and loved practicing Nephrology. He prided himself on opening dialysis clinics in areas of need across Kentucky and neighboring states. In addition to his career in medicine, he also focused on service outside of medicine. He served as Chairman of the Board at St. Francis School, Goshen and was a member of the board of The de Paul School. He did extensive work with Rotary International and Christ Church United Methodist and participated in numerous medical missions to Uganda, Nigeria, and Sri Lanka, receiving a Lifetime Achievement Award from the Louisville Rotary chapter. He won a Bell Award in 2008 for contributing significantly to the betterment of Louisville and its people. Rajah retired in 2016 after 50 years in the field. While retired, he had time to further pursue his love of travel, gardening, investing, and especially philanthropic efforts, starting the R. Karalakulasingam Family Foundation. He is survived by daughter Jasmine (Amit), son Jasper (Amanda), grandchildren Kian and Kellen Raheja, sister Rani, partner Joy Monsma, and ex-wife Peace Karalakulasingam. He was predeceased by brothers Keerthi and Thambipillai (Bo), and sisters Karuni, Chandra, Paki, and Nimal. Visitation will be held at Pearson’s Funeral Home, 149 Breckenridge Lane, Louisville, KY 40207, on the 11th of December from 4PM to 7PM. Services will be held at Christ Church United Methodist, 4614 Brownsboro Road, Louisville, KY 40207, on the 12th December at 2PM. Masks are required to attend. In lieu of flowers, please consider a donation to the following: West End School - Endowment Fund 3628 Virginia Ave. Louisville, KY 40211 and/or: Rotary Fund of Louisville 325 West Main St. Suite 1808 Louisville, KY 40202 Checks should be made out to: “Rotary Fund of Louisville” with memo line on check stating, “Dr. Kara Memorial.”

Rajanathan (Rajah) Karalakulasingam, 86, of Louisville, KY, passed away peacefully on the 29th of November, 2021 surrounded by loved ones, after a prolonged battle with cancer. Rajah was born on the 3rd of July, 1935 to Faith Rasamallikai Samuel... View Obituary & Service Information

The family of Rajanathan (Rajah) Karalakulasingam M.D. created this Life Tributes page to make it easy to share your memories.

Send flowers to the Karalakulasingam family.