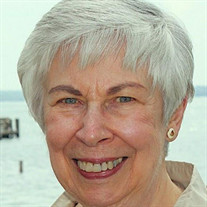 Phyllis Ann Neumayer, 90, of Louisville passed away on Tuesday, July 13, surrounded by her loving family peacefully at home. She was born in Chicago, Illinois on November 29, 1930 to Richard & Jane Schoenfeld. She grew up on the north side of Chicago and attended Augustana College in Rock Island, Illinois. In 1948, she met Carl Neumayer and they married in 1950 in Chicago. When she met Carl she gave up her career ambitions as they started a family. Carl and Phyllis’ life together began in Chicago and late in 1950 Carl joined the Army and they moved to Alexandria, Virginia. The birth of their first child, Susan, occurred at that time. In 1954, after the Carl’s discharge from the Army, they moved to Kansas City, Kansas where Scott, Brian and Jane were born. In total, they raised 4 children. In 1966, they moved to Louisville, Kentucky, then Arlington Heights, Illinois for 6 years and back to Louisville until now. After the children left home, Phyllis began a banking career with First National Bank. Over the years she managed to keep in touch with her “Round Robin” high school friends. During her over 40 years in Louisville, she enjoyed a life long bond with her bridge club friends. Like her mother, she was an accomplished artist whose favorite artist was Vincent Van Gogh. Many of her paintings now hang in the homes of family members. She also enjoyed music, playing the piano and international travel. She was a long time member of St. John’s Lutheran Church with many friends, singing in the choir and loved being part of the bell choir. Phyllis is preceded in death by her husband, Carl of 69 years and daughter Susan (Ted), and survived by Scott (Joanie), Brian (Teri) and Jane (Rob), 7 grandchildren, Elliott, Eric, Andy, Maggie, Erica, Katherine, Aaron and 3 great grandchildren, Collin, Rylie and Veronica. She is also survived by her sister Nancy Nelson (Jay) and 4 nephews. Visitation will be Friday, July 16, from 2:30 – 4:30pm at Pearson’s, 149 Breckenridge Lane. Funeral Service will be Saturday, July 17 at St. John’s Lutheran Church 901 Breckenridge Lane, starting at 1 pm with the burial following at Cave Hill Cemetery. In lieu of flowers, memorials may be sent to: St. John’s Lutheran Church, https://stjohnlutheranlouisville.weebly.com/ The St. Matthews Area Ministries, or American Macular Degeneration Foundation (AMDF)

Phyllis Ann Neumayer, 90, of Louisville passed away on Tuesday, July 13, surrounded by her loving family peacefully at home. She was born in Chicago, Illinois on November 29, 1930 to Richard & Jane Schoenfeld. She grew up on the north side... View Obituary & Service Information

The family of Phyllis Ann Neumayer created this Life Tributes page to make it easy to share your memories.

Phyllis Ann Neumayer, 90, of Louisville passed away on Tuesday,...

Send flowers to the Neumayer family.