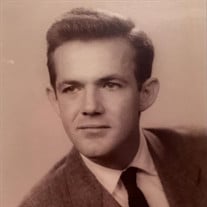 Dr. Phillip Harlan Cochran 94, of Louisville, Kentucky passed away peacefully at home on Friday, February 12, 2021. Phil was born on August 31, 1926. A graduate of the University of Louisville, class of 1950, he followed by attending and graduating from Texas A&M School of Veterinary Medicine, class of 1954. While at Texas A&M he met and married his former wife, Mimi Wilson Cochran and together had 3 daughters whom he cherished. Phil was Colonel Harlan Saunders Godson and namesake, and spent many summers and holidays during high school and college working for the Colonel, peddling his Godfather’s fried chicken from county to county and working closely with the Colonel. As part of the WWII’s greatest generation Sgt. Phillip Cochran served his Country as a medic in the U.S. Army during combat in the Philippines. Later he witnessed the surrender of Japan as part of the U.S. Army of Occupation. He practiced Equine medicine focusing on Thoroughbred racehorses and Saddlebreds. Among his many clients, were Don Harris, Red Crabtree, Jim B.; Robertson, Rock Creek as well as being the exclusive veterinarian for Warner Jones, Hermitage Farm for several years. He was a partner and owner of the Lyndon Animal Hospital until he retired in 1995. From the Backtrack of Churchill Downs to the World Championship Saddlebred Horseshow, “Doc” as he was lovingly called by everyone never missed a day of work. Everyone could count on him to be there day or night. A true “country vet”, Doc would bring the sickest dogs and cats, even a pony and a colt home over the weekend to be nursed back to health. This is what made him “the one of a kind Vet” who was loved and admired by all. After retirement, He bought land from Warner Jones in Prospect and built and owned Prospect Place Professional Center, Prospect, Ky. It was his pride and joy for the last half of his life. On any given day you could find him sweeping the parking lots, putting up fences and even at 85 years young, getting up on the roof to fix something. He thought of all of his tenants as family. He met and married Marie Hertzman and they spent 37 incredible years together. They shared a love of traveling to many places around the world making friends all along the way. With a beautiful blended family, the Hertzman family and the Cochran family became one. He is predeceased by his parents, Corrine and Shirley Cochran; and brother Charles. He is survived by his wife, Marie Hertzman Cochran, sister-in-law Estelle Cochran, and by three loving daughters, Lisa Cochran Hall(Robert), Daphne Cochran Kessler(Richard) Michelle Cochran Edson; and three step-children. Joseph Hertzman(Kelly), Allen Hertzman(Michelle), Jill Hertzman McGuigan(Dave); 11 grandchildren, Samantha, Ryan, Shelby, Grace, Nick, Julie, Rachel, Alec, Becca, Andy and Hailey, 3 great grandchildren, Camilla, Liam, Mackenzie and 7 grand dogs! Phil was a loving husband, father and grandfather and great friend to all who knew him. The family will host a Celebration of Life for Phil in early summer. Expressions of sympathy may be made to the American Saddlebred Legacy Foundation.

Dr. Phillip Harlan Cochran 94, of Louisville, Kentucky passed away peacefully at home on Friday, February 12, 2021. Phil was born on August 31, 1926. A graduate of the University of Louisville, class of 1950, he followed by attending and graduating... View Obituary & Service Information

The family of Phillip Harlan Cochran created this Life Tributes page to make it easy to share your memories.

Send flowers to the Cochran family.