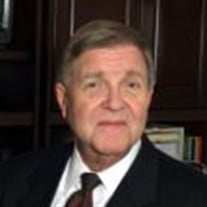 Otto G Feddern, 78, was born May 25, 1941 in Louisville, KY. A lifelong resident of Louisville, he passed away October 5, 2019. Otto graduated Phi Kappa Phi, from the University of Louisville in the mid-1960s with a Bachelor of Music, Bachelor of Education, and Masters (with Honors) in Theory and Composition, before pursuing several successful careers. In the field of education, his analytical, organizational, management, and motivational skills allowed him to develop one of the largest instrumental music departments in the State of Kentucky. After ten years in education, a sales career was next with a major national fund-raising company for schools and youth sports. Rising to the position of General Sales Manager, it was here that he met and married Mina, his wife of 35 years. Otto entered the financial services industry in the fall of 1984, and since then developed a unique and proprietary performance monitoring system for his clients, 401k plans, Endowments, Foundations, Taft Hartley and ERISA Plans. His 1% At Risk platform was designed specifically to protect assets for clients and he was able to protect the assets of his clients during the 2008 stock market downturn. He is Past-Chairman of the Board of The DePaul School in Louisville and Member of the Executive Committee, as well as a past member of the Board of the Louisville Rotary Club, which awarded him “Rotarian of the Year” for 2002. He is a charter member and founder of the Prospect/Goshen Rotary Club and was the Governor’s special representative to the Louisville Metro Area in 1993, 1994, and 1995. As past original Chairman of Operation Brightside-Downtown, and Board Member of the Louisville Central Area, he received the Distinguished Citizen of Louisville Mayor’s Award for two consecutive years in 1991 and 1992 as well as the Community Service Award from the American College of Physicians in 1999. He was also a previous member and Treasurer of the Ky FPA (Financial Planning Association), GLI (Louisville Chamber) and One Southern Indiana (So. Indiana Chamber). Otto is survived by his loving wife Mina and his sister Kay (Joseph) Krug. Memorial open house will be held at Wesley Manor Community Center 5400 E. Manslick Road Wednesday October 16 from 4-7 pm. In lieu of flowers, expressions of sympathy can be made to St. Vincent DePaul School in Louisville.

Otto G Feddern, 78, was born May 25, 1941 in Louisville, KY. A lifelong resident of Louisville, he passed away October 5, 2019. Otto graduated Phi Kappa Phi, from the University of Louisville in the mid-1960s with a Bachelor of Music, Bachelor... View Obituary & Service Information

The family of Otto G. Feddern created this Life Tributes page to make it easy to share your memories.

Send flowers to the Feddern family.