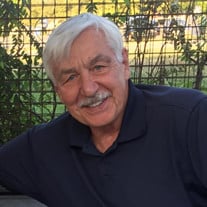 Nicholas Nahorniak, 75, passed away at home on Tuesday, November 23, 2021. He is survived by his wife of 52 years Valerie (nee) Gill. Valerie and Nick were born on the same day, same year, same state, 3 hours apart. It was meant to be! Nick is also survived by his daughter, Victoria Broadus (Pat); grandchildren, Hanley Broadus and Benton Broadus; sisters, Mary Jo (Mike) Flannery, Nancy Cadenhead, brother, John (Debbie) Nahorniak; and many nieces and nephews. He is preceded in death by his parents, Russ and Stella Nahorniak and brother Russ (Kay) Nahorniak. Born and raised in Minnesota Nick had a love of the outdoors and sports. He attended the United States Military Academy at West Point where he played football and finished his military career with the rank of Captain. His service included a tour in Vietnam. Following the military he worked for Corning Glassworks, Lenox Crystal and Brown Forman from which he retired in Louisville, Kentucky. He was active in many organizations and clubs through the years including Rotary, Lions, YMCA, United Way and was a recipient of the Kentucky Colonel award. Nick was an avid sportsman all of his life. He loved hunting and fly fishing, tying his own flies and traveling throughout the western United States and Alaska to pursue his passion. Nick also loved a good golf game and many Saturday mornings found him on the links at various courses including his home course, Hunting Creek. He loved a good joke, a good scotch, carving, hated ties, and loved his family more than anything. Thank you to the nurses at Baptist Hospital East and Hosparus of Louisville for the care given him. He will be greatly missed by his extended family and many friends. Visitation will be 3- 6 p.m. Friday, November 26, 2021 at Pearson’s, 149 Breckenridge Ln. Memorial donations to the charity of your choice are appreciated. Arrangements under the direction of Pearson's, "Where Louisville Goes to Remember".

Nicholas Nahorniak, 75, passed away at home on Tuesday, November 23, 2021. He is survived by his wife of 52 years Valerie (nee) Gill. Valerie and Nick were born on the same day, same year, same state, 3 hours apart. It was meant to be! Nick... View Obituary & Service Information

The family of Nicholas Nahorniak created this Life Tributes page to make it easy to share your memories.

Nicholas Nahorniak, 75, passed away at home on Tuesday, November...

Send flowers to the Nahorniak family.