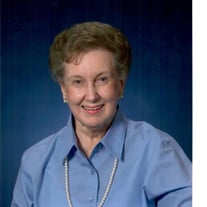 Nancy Bauman Maney, passed away peacefully on July 24, 2021, at the age of 85. Nancy was born in Nashville, TN on September 30, 1935. She was preceded in death by her parents Cliff and Clara Bauman, who she adored, and was their only child. She attended the high school department of Ward-Belmont School in Nashville and was a graduate of Harpeth Hall School in Green Hills, TN where she was a member of Delta Beta Sigma preparatory school sorority. She earned an Associate Degree in Business at Draughon’s Business College and a Bachelor of Arts in Sociology at Vanderbilt University. While at Vanderbilt, she was a member of The Order of the Golden Arrow of the Phi Beta Phi sorority and later served as the Vice President of the Louisville chapter of the Pi Beta Phi Alumni club. After graduation and prior to marriage, she worked as a Product Researcher in the Market Research Department at Procter & Gamble and as an Accounts Payable Financial Analyst at General Electric. After marriage, she settled in Louisville, KY, where she lived for the rest of her life. In 1980, she rejoined General Electric as a Customer Service Representative in their National Contract Service Center and worked there for 16 years, until she retired in 1996. On November 6, 1960, she joined Beargrass Christian Church, where she was a member of over 60 years, and was a Deacon, Board Member, active volunteer in many capacities, and long-time member of the Friendship Sunday School class. Her true passion was her family, as a daughter, wife, mother, and grandmother and her largest source of joy was their happiness and whatever she could do for them. She was also an active volunteer in Louisville in many roles over the years, at her children’s schools, scout troops, sports teams, and in St. Matthews Area Ministries and Suburban Hospital. Starting as a child attending games with her parents, she was an avid sports fan of the Vanderbilt Commodores. After moving to Louisville, she became a U of L basketball and football season ticket holder for nearly 40 years and enjoyed trips to away games with her many U of L fan friends. She frequently travelled to her children’s homes, going as far away as Australia to do so. She is survived by her children Kathy (Andy) and Russ (Kim), and her grandchildren Sarah, Diana, Luca (Matti), and Michelle. A celebration of Nancy’s life be held on Thursday, July 29, 2021 at 11 a.m. at at Beargrass Christian Church, 4100 Shelbyville Road. Visitation will be from 4-7 p.m. on Wednesday at Pearson's Funeral Home, 149 Breckenridge Lane, Louisville, KY with private burial. In lieu of flowers, donations can be made in her honor to Beargrass Christian Church.

Nancy Bauman Maney, passed away peacefully on July 24, 2021, at the age of 85. Nancy was born in Nashville, TN on September 30, 1935. She was preceded in death by her parents Cliff and Clara Bauman, who she adored, and was their only child.... View Obituary & Service Information

The family of Nancy Bauman Maney created this Life Tributes page to make it easy to share your memories.

Send flowers to the Maney family.