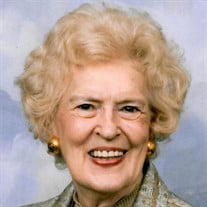 Nancy Dolt Langley Fitch, 98, died Thursday March 25, 2021. She graduated from Louisville Girls High School in 1940, then attended and graduated from Spencerian Commercial College. After working for several years in industry as a Secretary, she attended the University of Louisville and received a BS degree from the School of Business and a M of ED degree in education. She began teaching business subjects at the Ahrens Vocational High School in 1950 and also taught several seasons at University College UL. In 1972-73 she was selected as the Louisville Business Teacher of the Year by the Administrative Management Society. In 1978 she was chosen by the River City Chapter of the American Business Women's Association as Business Woman of the Year. In 1979 she was chosen as the Kentucky Business Education Teacher of the Year, and in 1980, was nominated by the University of Louisville for the title of National Business Teacher of the Year. She was a charter member of the Women's Chamber of Commerce of Kentucky. She was a speaker at workshops and professional organizations and held state and national office positions. In 1972 she was the Convention Chairman in Louisville for the Southern Business Education Association. In 1982 she retired from teaching and became involved in many social and civic clubs. Past Presidents included Kentucky Business Education Assoc.; American Assoc. of University Women(Louisville ); Jefferson Co. Retired Teachers Assoc.; Delta Zeta Alumnae Chapter; Key to the City; and the University of Louisville Women's Club. She was an active member of the Woman's Club of Louisville and was its photographer for many years. As a charter member of the University Club, she received the 2004 University Club Distinguished Service Award. As a member of the program committee, she introduced the monthly travelogues and was known as the "travelogue lady." Her interest was also in the Wellness Fitness Center; English Speaking Union; Frazier International History Museum; Louisville Orchestra; Speed Museum; Louisville Ballet; WACA World Affairs Council; Sister Cities; She was a member of St Francis in the Fields Episcopal Church and served as greeter, usher and litanist. She was preceded in death by husbands, Alfred L. Langley Jr. and Howard Fitch. She is survived by her son, Alfred L. Langley III, granddaughter Karen; several nieces and nephews. Graveside service will be 2:30 PM Tuesday at Cave Hill Cemetery. Visitation will be 1-2 PM Tuesday at Pearson’s, 149 Breckenridge Lane. Memorial gifts may be made to St Francis in the Fields or charity of your choice.

The family of Nancy Dolt Langley Fitch created this Life Tributes page to make it easy to share your memories.

Send flowers to the Fitch family.