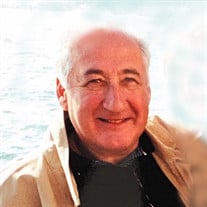 Morton Hart Sachs, 85, of Louisville died in his sleep surrounded by loving family Monday, September 9, 2019. He lived a glorious and happy life of his own making in every way. He was born in South Bend, Indiana. He graduated with an MBA in finance from Indiana University. Mort moved to Louisville and started his own investment advisory firm in 1960. A true maverick, he founded one of the earliest mutual funds; it was described by Money Magazine and Consumer Reports as one of the top funds in the country. Mort served on countless boards and committees and, among others, was a founding member of the Healing Place, House of Ruth and Jefferson Club. Mort believed his greatest accomplishment, outside of his family, was studying and saving the Navajo Sand Paintings & collection of Franc Johnson Newcomb. Along with his first wife, Corky, he fostered the spirituality of the Navajo people through their sand paintings, which were given to Dine College in a beautiful blessing ceremony. To add to the body of knowledge of the world was always Mort’s inspiration, therefore he created the website thebodyofknowledge.org as his legacy. He was a resident of Longboat Key for over 20 years and a lifelong regular at Stop 19 in Michigan City, Indiana on Lake Michigan. Mort was a gentle soul, man of vision, titan of finance, and cherished and loyal partner and friend. If you have occasion, please lift your Old Fashioned in a toast to Mort. Here’s to that sweet two-year-old boy with a million-dollar smile who always came home from the shop with a dime’s worth of candy when he only had a penny, to his self-titled “hamster brain” that never stopped working and made millions for so many, to the generous grandpa who was ever ready to stop the stock market for a quick cartoon and a chocolate bar, and to his immense desire to help others and his never ceasing ideas of how to help the homeless. His exuberance for life was only outshined by his exuberant love for his family and loving wife, Kathy. He is survived by his wife of nearly 20 years, Kathleen Hart Sachs; his brothers, Harley L. Sachs (Ulla) and Charles I. Sachs; the mother of his children, Mary S. “Corky” Sachs; his children, Jenny Sachs Dobbins (Mark), Stephanie Sachs Sparks, and A. Nicholas Sachs (Lauri); his grandchildren, Kate Dobbins Bonner (Jeff), Anne Kash Barkeley (John), Mary Morton “Molly” Dobbins, Cassidy Haynes Sachs, Charles Jacob Sachs, Mary-Georgia Sophia Sparks, his step-children, Joanna Russell and William A. Russell; great grandchildren, Wesley, Jane, Sonny, and Stella, and a number of beloved nieces and nephews. There will be a visitation/celebration of Mort’s life well lived at Pearson’s, 149 Breckenridge Lane, from 3:00 to 7:00 on Thursday, September 12, 2019. The family asks that those interested in making a contribution in honor of Mort consider The Healing Place, 1020 W. Market Street, Louisville, KY 40202 and Wellspring, 225 W. Breckinridge Street, Louisville, KY 40203.

Morton Hart Sachs, 85, of Louisville died in his sleep surrounded by loving family Monday, September 9, 2019. He lived a glorious and happy life of his own making in every way. He was born in South Bend, Indiana. He graduated with an MBA in... View Obituary & Service Information

The family of Morton Hart Sachs created this Life Tributes page to make it easy to share your memories.

Morton Hart Sachs, 85, of Louisville died in his sleep surrounded...

Send flowers to the Sachs family.