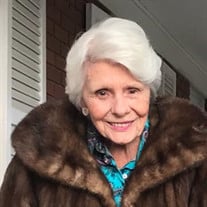 Mona Catherine (M.C.) Doss Ussery passed away on March 19, 2020, in the comfort of her room at The Legacy at English Station, a memory care home that provided love and friendship during her final days with dementia. M.C. was pre-deceased by her husband, Brigadier General Elmus S. Ussery, and sister, Betty Kremer. She is survived by her two children, Walter Kent Ussery (Nicole) of Nashville, Tennessee, and Katherine Gaylee Ussery of Louisville, Kentucky, several generations of nephews and nieces, and Misty, her beloved Papillon dog. Mona Catherine was born in Louisville, Kentucky on Derby Day - May 6, 1933. Broker’s Tip was declared the Derby winner at about the same time that baby Mona came into the world. It was a fitting beginning for a woman who loved animals her entire life, starting with 4-year old Mona’s best friend – a bulldog named Peggy. Mona rescued Peggy from Louisville’s Great Flood of 1937, going back into the house to find Peggy at the top of the basement stairs as water tried to engulf her. An animal also led to the love of her life finding her when at age 26, a tall Texan attempted (unsuccessfully) to sell a toy poodle to her Mother and Grandmother. Instead, he traded the dog for a date with the pretty girl in their colorized photograph. She and the Texan, Elmus Snider Ussery, became best friends and married, raising two adopted children, and loving, laughing and sharing life together in Louisville 44 years prior to Elmus’ passing in 2006. Elmus shortened her name to M.C., and also called her Monkey, a reference to “Monkey C.” M.C.’s varied work career included being a Telephone Operator and Veterinary Assistant during the 1950s; Secretary in the automobile industry during the 1960s, Bookkeeper, Interior Decorator, and Homebuilder for The Ussery Corporation homebuilding business from the 1970s to 2005. During her lifetime, M.C. graduated in the last all-girls class of Atherton High School, taught Vacation Bible School, attended Jr. College in Santa Ana, CA, lived briefly in Japan, owned farms with horses and countless dogs and cats, played tennis often and well, offered a listening ear and kindness to most anyone, volunteered with the Fillies, mowed the grass on a blue Ford tractor (a birthday present from her husband), moved 23 times (all within Louisville), loved her fish pond, attended Bible Study Fellowship, won at cards (especially Gin Rummy), danced and danced some more, traveled extensively, preferred her Vodka Tonic in a tall glass, worshipped at St. Paul and Christ Methodist churches, gave steadfast support and unfailing love to partner with her husband to achieve great success, and loved and was dearly loved by her family and friends. M.C.’s arrangements are being handled by the fine people at Pearson’s Funeral Home. There is no visitation; however, a memorial service will be planned for friends and family as soon as the Covid-19 crisis allows. She will be laid to rest beside the love of her life at Cave Hill Cemetery in a private burial. The family asks that all expressions of sympathy be made as gifts to Christ Church United Methodist or Hosparus of Louisville.

Mona Catherine (M.C.) Doss Ussery passed away on March 19, 2020, in the comfort of her room at The Legacy at English Station, a memory care home that provided love and friendship during her final days with dementia. M.C. was pre-deceased by... View Obituary & Service Information

The family of Mona Catherine (M.C.) Doss Ussery created this Life Tributes page to make it easy to share your memories.

Send flowers to the Ussery family.