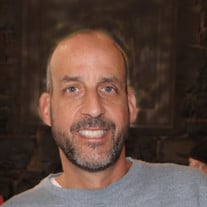 Michael Anthony Kraft, 52, died peacefully at his home on Thursday, April 25, 2019. He was born in Louisville to Ramsey and Carol Kraft on June 22, 1966. He was married to Allison Anderson on July 29, 1989. Together they had a beautiful life with two daughters, Shelby Kraft Hyman and Lindsey Kraft. Michael will be remembered as someone who made an irreplaceable mark on the lives of everyone who crossed his path. He had the ability to light up a room with his radiant spirit and witty humor. Above all, he never lost his faith and was always determined to serve as an inspiration to others who were fighting cancer. Michael was an inspiration to us all. He was a co-owner of Nanz and Kraft Florist with his two brothers, Eddie and David Kraft. The florist was founded in 1850. He was a former President of the St. Mathews Business Association. He enjoyed traveling with his family, cooking, being with friends, skiing in Colorado, and supporting the University of Kentucky and the University of Louisville. “He always favored the winning team and was known to flip hats in the middle of a game.” He was a graduate of Trinity High School and the University of Kentucky. He is survived by his loving wife, Allison Anderson Kraft and daughters Shelby Kraft Hyman (Alex) and Lindsey Kraft. He is also survived by his parents Carol and Ramsey Kraft, brothers Eddie (Sharon) Kraft, David (Susan) Kraft, as well as his in-laws Brenda and John Anderson, and his nieces and nephews. His Funeral Mass will be celebrated at 10 am Monday Holy Trinity Catholic Church, 501 Cherrywood Road with burial to follow in Cave Hill Cemetery. Visitation 1-4 pm Sunday at Pearson’s, 149 Breckenridge Lane. Memorials may be given to , University of Pittsburgh and in memo indicate "peritoneal research". Mail to, Medical and Health Sciences Foundation, University of Pittsburgh and UPMC Forbes Tower, Suite 8084, 3600 Forbes Avenue at Meyran Avenue Pittsburgh, PA 15213.

Michael Anthony Kraft, 52, died peacefully at his home on Thursday, April 25, 2019. He was born in Louisville to Ramsey and Carol Kraft on June 22, 1966. He was married to Allison Anderson on July 29, 1989. Together they had a beautiful life... View Obituary & Service Information

The family of Michael Anthony Kraft created this Life Tributes page to make it easy to share your memories.

Michael Anthony Kraft, 52, died peacefully at his home on Thursday,...

Send flowers to the Kraft family.