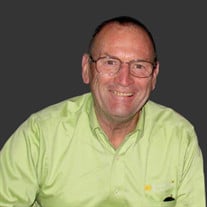 Michael Hardesty, 75, passed away at his home on April 28, 2021. He died peacefully with the presence of his sister, children, grandchildren, and, most important, his loving wife of 50 years. A lifelong resident of Louisville, he attended St. Columba Elementary, Flaget High School and the University of Louisville. Later in life, Michael would also receive a certificate in creative writing from Stanford University which, for him, served as a source of great pride. He founded a marketing communications firm 40 years ago where his appreciation for the written word began to develop. He would become a published author and poet, but it was his heartfelt, personal writing that resonated most with those he loved and those who loved him. His interests ranged from field hockey and fishing to horse racing and the arts, but, above all, Michael was forever devoted to his family. Throughout his life, he found no greater joy than that of spending time with his grandchildren, always taking the extra step to ensure those moments were meaningful and memorable. Poppa will be missed. He was preceded in death by his parents, Joseph Francis and Mary Hardesty; his brother, George Hardesty; and his sisters, Jeanne Allin and Margaret Hardesty. He is survived by his wife, Martha Barker Hardesty; children, Paul (Dana) Hardesty and Suzanne Pritchard (Willy); grandchildren, Sara Beth Hardesty and Owen and Thomas Pritchard; and sister, Mary Jo Roberts. Visitation will be held from 1:00 – 4:30 PM Sunday, May 2, at Pearson’s, 149 Breckenridge Lane. In lieu of flowers, expressions of sympathy may go to The Louisville Orchestra.

Michael Hardesty, 75, passed away at his home on April 28, 2021. He died peacefully with the presence of his sister, children, grandchildren, and, most important, his loving wife of 50 years. A lifelong resident of Louisville, he attended... View Obituary & Service Information

The family of Michael Hardesty created this Life Tributes page to make it easy to share your memories.

Send flowers to the Hardesty family.