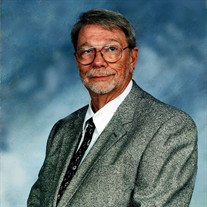 Michael Martin Adkins died Saturday, August 24, 2019. He was born 11-9-1937 in Knoxville, Tennessee, to Sam and Martha Adkins. Sam was a journalist who eventually retired and became a Methodist minister in his 60s. Martha was an English teacher who became a stay-at-home mom but eventually went back to teaching, this time with special-needs kids.. They had two more children: Gerry, born in 1941, three years younger and now deceased, to Mike's and my deep grief--he and Gerry were very close--was a Navy veteran and college electronics instructor. Their third child is Martha (Rain), born in 1950, a retired psychiatric social worker . Gerry passed away in 2014 delivering a devastating blow to Mike & Rain. Mike initially went to Purdue, hoping to become an engineer, but ran up against two problems: 1.) Our family's little neurological problem with math (we're hopeless), and 2.) God, in the form of a calling to the Methodist ministry. He went to Kentucky Wesleyan, where he met his first wife, Ann May Adkins (Aug. 1937-Jan 2017) and then to Presbyterian Seminary. Consistent with the Methodist custom of moving clergy around from year to year, he served first in small rural churches and then in several Louisville parishes. He was an excellent preacher, engaging and warm, but scholarly, and willing to ruffle feathers when necessary. During this time, he and Ann adopted two gorgeous, bright, talented kids, Kenneth Paul Adkins Sr.(Elena) and Elizabeth Adkins Crane (Scott). . . He left the Methodist ministry and his first marriage in the '70s. (Ann May Adkins has recently died.) In the '80s he became an addictions counselor, working at JADAC for many years. During those years he gained his own recovery from the alcoholism that had ended his second marriage (to Betty Thrasher. From then until his death, he remained sober (38 years), and helped hundreds of others to get and stay that way He married Carol Hicks, and they had 14 wonderful years together before her death from leukemia. . He spent his remaining career in the people business, first as a psychotherapist and then helping people figure out the student loan system. Then he retired due to increasing physical problems. He was as good, gentle and generous a man as many of us have ever known, and courteous even in passionate disagreement. He always had his younger siblings & children's backs, in large ways and small. He was a world-class writer and cook. He loved animals, and never went very long between fur-kids. He shared three family passions: he adored fishing and baseball, and in his last years greatly enjoyed gardening. Like our late brother, he was extraordinarily, hysterically, dangerously, fall-down-and-howl funny. He described himself as an agnostic, though I would have said "animist" was often closer to the truth: He had a splendid eye for beauty and a deep love of nature, and seemed to find what he called "the Great Spirit" there and in the recovery community of which he was a part, His real religion was the one the Dalai Lama famously claimed: Kindness. And he possessed it in extraordinary measure. He also is survived by 7 grandchildren, Shannon Crane, Shelley Swan (Ahren), Kenny Adkins, Lloyd Adkins, Scotty Crane, Jessie Adkins & Samantha Crane. Two great grandchildren, Susie & Lilly Swan. Memorial service will be at 3 p.m. Saturday, Sept. 14, 2019 at St. Mark's Episcopal Church, 2822 Frankfort Ave. Visitation will be from 1-3 p.m. at the church.

Michael Martin Adkins died Saturday, August 24, 2019. He was born 11-9-1937 in Knoxville, Tennessee, to Sam and Martha Adkins. Sam was a journalist who eventually retired and became a Methodist minister in his 60s. Martha was an English teacher... View Obituary & Service Information

The family of Michael Martin Adkins created this Life Tributes page to make it easy to share your memories.

Send flowers to the Adkins family.