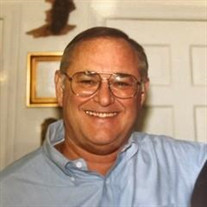 Merritt Edward Marcus, 85, passed away in the early hours of July 27, 2019, surrounded by his loving family. He was born on March 6, 1934. He was preceded in death by his parents Calvin and Henriette Marcus, and his brother Calvin Marcus Jr. Merritt was born in Louisville, Kentucky. He attended Louisville Male High School where he played football as a star punter and helped his team to the Orange Bowl. He then attended Indiana University from 1952-1956. He spent his entire career in the family business, Marcus Paint Company, which was established in 1853. During his tenure the business grew from one plant in Louisville to another plant in Nashville, Tennessee, doubling the company’s capacity. Later, Performance Powders LLC was opened in Louisville and became the first plant in Kentucky to manufacture powder coatings. Aside from sitting as President and CEO of Marcus Paint Company, Merritt was also a member and past president of the Louisville Paint and Coatings Association and served as Chairman of the Management Information Committee of the National Paint and Coatings Association. He was a former member of the Pyramid Trust, Kamp Kaintuck, and a founding member of the Hurstbourne Country Club. He served for seventeen years on the Board of Directors of Royal Gold, INC. Gramps, as he was known to his loved ones, was an avid golfer. He was on the golf team at Indiana University, and qualified for two national amateur tournaments in Washington D.C. and Denver, Colorado. He played on many international courses and loved golf trips with his buddies. Gramps loved aviation and flying his plane. He enjoyed fishing in Canada, traveling the world with his wife Judy and dear friends, as well as spending time in Spring Island, South Carolina and Sanibel, Florida where he made lasting memories with his friends and family. Merritt was a loving and caring husband, father, grandfather, and great grandfather. He is survived by his loving wife of 38 years Judy and his eight children: Theresa, Douglas, and Matt Marcus, Beth Buechler, Sharon Lucchese (Joe), Mary Jude Haws, Bob Buechler, and Erika Johnson (Brian). He has seventeen grandchildren and eight great grand children, with number nine on the way. Visitation will be Tuesday, July 30 from 3-8 pm at Pearson Funeral Home – 149 Breckenridge Lane, Louisville, Kentucky, 40207. His funeral mass will be Wednesday, July 31, at 10 am at St. Francis of Rome Church, 2119 Payne St, Louisville, KY, 40206, with burial to follow at Cave Hill Cemetery. For those that wish, the family asks that donations in his honor be made to Greater Kentucky and Southern Indiana Alzheimer’s Association – 6500 Dutchmans Lane, 40205. The Family would like to extend special thanks to Hosparus for the outstanding and professional care given to Gramps in his final months, and warmest thanks to his tender caregivers.

Merritt Edward Marcus, 85, passed away in the early hours of July 27, 2019, surrounded by his loving family. He was born on March 6, 1934. He was preceded in death by his parents Calvin and Henriette Marcus, and his brother Calvin Marcus Jr.... View Obituary & Service Information

The family of Merritt Edward Marcus created this Life Tributes page to make it easy to share your memories.

Merritt Edward Marcus, 85, passed away in the early hours of...

Send flowers to the Marcus family.