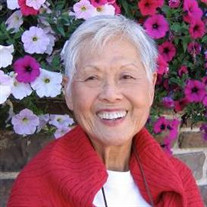 Melvia Lee Cheng died on December 4, 2021 at the Episcopal Church Home in Louisville, Kentucky. She was 94 years old and was attended in her passing by her children. Melvia was born in Honolulu, Hawaii on September 5, 1927 to T.Y. and Bernice Lee. She graduated from Roosevelt High School in Honolulu. Curious about the world beyond the beaches of Oahu and determined to go to college, she left for the University of North Dakota where she was introduced to winter and rhubarb pie. After two years in Grand Forks, she transferred to Kansas State University where she received a degree in Home Economics. She was the first in her family to attend college. Melvia’s three younger sisters credited her with inspiring them to follow in her footsteps. After graduation, Melvia moved to Boston where she worked at Beth Israel Hospital as a dietician and where she met Dr. Samuel H. Cheng whom she married in 1954. Three years later, they moved to Louisville, raised three children, and established a diverse circle of friends. Melvia loved tennis, flowers, bright colors, her grandsons, the New York Times, and cooking, a skill at which she excelled. In their home, she and Sam introduced many of their Louisville friends to authentic Chinese food. For her, sharing a meal was sharing friendship. She greeted each day with an open mind, a generous spirit, and an incandescent smile. For most of the last years of her life, Melvia enjoyed winters in the Gulf coast community of Bayport in Longboat Key, Florida. Until moving to the Church Home, she regularly attended services as a member of the congregation at Louisville’s Christ Church Cathedral. Melvia was preceded in death by her parents, her husband, and her sister, Marion. Survivors include sisters Margaret Kaulukukui and Marietta Tom (Thomas); children, Steven (Meredith White), Cynthia Crumpton (Henry), and James; grandsons Nathan, Samuel (Joanne), and Lucas (Kristina); great granddaughters Isabelle and Siena, and eight nieces and nephews. The Cheng family thanks the staff of the Church Home. They are also grateful for the loving care provided to Melvia by Regina Kerns, Barbara Stigall, Lee Ann Mathis, Connie Rucker, and, especially, Brigette Duncan and Sheila Young. Melvia’s ashes will be taken to Hawaii. A virtual memorial will be scheduled for a future date. Arrangements under the direction of Pearson's. Donations in her memory may be made to the Home of the Innocents, online, https://www.homeoftheinnocents.org or by mail, 1100 East Market St. Louisville, KY 40206 or to a charity of your choice. Arrangements under the direction of Pearson's. "Where Louisville Goes To Remember".

Melvia Lee Cheng died on December 4, 2021 at the Episcopal Church Home in Louisville, Kentucky. She was 94 years old and was attended in her passing by her children. Melvia was born in Honolulu, Hawaii on September 5, 1927 to T.Y. and Bernice... View Obituary & Service Information

The family of Melvia Lee Cheng created this Life Tributes page to make it easy to share your memories.

Melvia Lee Cheng died on December 4, 2021 at the Episcopal Church...

Send flowers to the Cheng family.