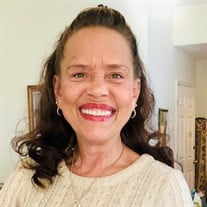 Melissa DeHaven Miller passed away December 31, 2020 at the age of 49. A Louisville native, Melissa was a longtime member of St. Matthews Baptist Church. After moving to Northern Virginia as a teenager, Melissa became a member of Columbia Baptist Church where she sang in the choir. She was a proud graduate of James Madison High School in Vienna, Virginia and studied at Shepherd College. She is survived by her mother, Martha Miller Boltz, her sister Abby Miller Hanger (Kelvin), her nephews Lucas, Maxwell and Jack Hanger, her niece Amanda Hanger, and her aunt, Elizabeth Waters (James R.) She is also survived by her stepbrothers Bruce Boltz (Paula), Michael Boltz (Valerie), Howard Boltz (April), and stepsister Sally Boltz. She is preceded in death by her father, Philip Franklin Miller, dad Bruce Donald Boltz, and her aunt Dorothy Banta, as well as cousins Brian and Kevin Waters. Melissa was a beloved daughter, sister, niece, aunt and friend. She loved to sing and had an amazing voice. She was an accomplished cook and spent many years in the food service industry while also perfecting recipes at home and delighting friends and family with her culinary creations. Melissa loved fiercely and was loyal and devoted to all. Many friends have spoken of the role Melissa played in their lives while on their owns paths to sobriety. Expressions of sympathy can be made to Ladies of Promise, a facility in Louisville whose mission it is to assist young women achieve and maintain their sobriety. Their care of and dedication to Melissa was very much appreciated by her family. It is our hope that donations made in Melissa’s memory might further their mission and help others lead a fruitful life. Ladies of Promise 2133 West Market Street Louisville, KY 40212

Melissa DeHaven Miller passed away December 31, 2020 at the age of 49. A Louisville native, Melissa was a longtime member of St. Matthews Baptist Church. After moving to Northern Virginia as a teenager, Melissa became a member of Columbia Baptist... View Obituary & Service Information

The family of Melissa DeHaven Miller created this Life Tributes page to make it easy to share your memories.