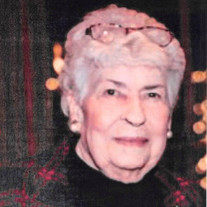 Mary Jean (Aiken) Breneman, 90, passed suddenly on September 7, 2020 in Louisville, Kentucky. She was born January 10, 1930 in Crystal Springs, Mississippi to James and Stella (Duncan) Aiken. Preceding Jean in death are her husband, Robert B. Breneman Jr, sister, Genevieve Fulton, grandson, Jason Paul Breneman and great grandson Ryder Nichols Deitz. She is survived by four stepchildren; Gary Breneman (Kathy), Richard Breneman, Kathryn Hatfield (Nick), and Gregory Breneman (Laura) in addition to her nephew, Paul Fulton (Jeannie) and niece, Camille Moore (Roger).She adored her twelve grandchildren and seventeen great-grandchildren. Jean held a bachelor degree in business from the Christian, all women's Mississippi College. She used her lightning quick typing and high style grammatical skills to propel her through her career ending with more than 10 years teaching at Spencerian College (Louisville). She retired to a life of world travel, volunteerism, and continued education through elderhostel opportunities. Jean was a devout Christian and a long time member of the Broadway Baptist church family in Louisville. She enjoyed social gatherings, was witty, friendly, resourceful, clumsy (she often reminded us she had failed P.E.), and very accomplished in preparing southern cuisine. In later years she couldn't hear worth a darn but faked it with lip reading and a beautiful smile. Being one of the last of her "partners in crime" to still drive she often found herself with a car full of unwitting participants in many hilarious adventures due in part to her particular driving style of one foot on the gas one foot on the brake. Jean was a devoted friend to many. We loved her, will miss her, and await the day we will be reunited. Service will be 1p.m., Saturday, September 12, 2020 at Pearson's, 149 Breckenridge Lane. Visitation will be 10a.m.-until time of service.

The family of Mary Jean Aiken Breneman created this Life Tributes page to make it easy to share your memories.

Send flowers to the Breneman family.