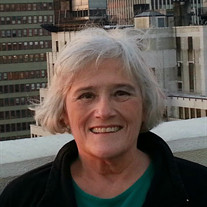 Mary Jane Glauber, age 71, died on March 28, 2020, in Louisville, KY, from complications related to having Glioblastoma brain cancer. She was born on January 19, 1949, in Albany, New York, to John Wesley Hacker and Mary Margaret Stinard Hacker. Mary Jane was preceded in death by both of her parents and her brother, Dr. Louis Charles Hacker. She is survived by her husband, Peter J. Glauber; their daughters, Margaret (Maggie) Glauber Horn (John), Mary Catherine (Molly) Glauber Coco (Brian), and their son John P. Glauber (Pamela); as well as siblings, nieces, nephews, and cousins. She is also survived by her grandchildren: Charles Horn, Paul Horn, Wesley Horn, Cora Glauber, Thomas Glauber, and Emilia Coco. Being a mother and a grandmother were Mary Jane’s greatest joys in life. A lifelong student and lover of travel, Mary Jane received her bachelor’s degree from Boston University and master’s degree from Indiana University in Bloomington. She studied abroad in Geneva, Switzerland, through Sarah Lawrence College, at Universidad Iberoamericana in Mexico City, Mexico, and at the Universidad de Salamanca in Spain. Mary Jane began teaching in the Louisville City Schools soon after the civil rights movement and before court-ordered busing, retiring from JCPS in 2000. She taught history, French, and Spanish. After retiring, Mary Jane was able to become more involved with the management of her family farm. She was a founding member of a women’s group known as The Generation Farmers of Southwest Iowa and was recognized as Woman Farmland Owner of the Year in 2018 by the Soil and Water Conservation District of Mills County Iowa. Mary Jane was a member of the Kentucky Society of Natural History. She enjoyed photographing and sharing all the beauty in the natural world around her. Mary Jane and her husband were members of the American Association of Interchurch Families. She volunteered at the Kentucky Refugee Ministries and was a member of Amicale Française. She attended the Religious Society of Friends in Louisville and was a member of the Episcopal Church of the Advent. Her memorial funeral will be at a later date, when we may all safely gather. Arrangements under the direction of Pearson's. In lieu of flowers, memorial donations may be made to KRM (Kentucky Refugee Ministries), 969-B Cherokee Road, Louisville, KY 40204; the Home of the Innocents, 1100 East Market Street, Louisville, KY 40206; or The Center for Women and Families, 927 S. Second Street, Louisville, KY 40203.

The family of Mary Jane Glauber created this Life Tributes page to make it easy to share your memories.

Send flowers to the Glauber family.