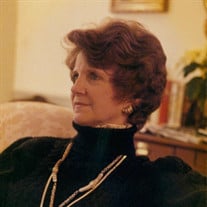 Polly Walker Cochran, age 82, died at her home on October 9, 2020. Born on October 22, 1937, on Long Island, New York, Polly was the daughter of the late Archibald Prentice Cochran and Mary Blair “Polly” Pryor Zimmer and the sister of Margaret Lee Cochran. She was a graduate of the Kentucky Home School, a precursor of Kentucky Country Day School, and Bennett Junior College and the University of Louisville, from which she graduated with a degree in art history. She worked for Dario Covi, Professor of Fine Arts, for a number of years after graduation and later also worked with Moritz Bomhard and others instrumental in the founding of the Kentucky Opera Association, coordinating and developing scenery with Ming Dick for the organization’s productions. Polly’s accomplishments and talents reflected her aesthetic education and personal values. As a member of the Speed Museum’s New Collectors group, she developed an interest in collecting art, focusing especially on twentieth-century portraiture and still-lifes. She also cultivated a talent for home decorating and relished transforming spaces into well-appointed, intimate wonders rich in detail, color, and comfort. Her sensibilities also extended to the small meadow behind her home. Bordered by trees and filled with tall grasses flecked with wildflowers, the area evoked the landscape of her youth where she used to ride her childhood horse Candy. It drew deer and the occasional wild turkeys which she enjoyed seeing from her kitchen window as they nosed through and nibbled on the greenery. Polly also had a deep and life-long interest in cooking, food, and entertaining. Having earned the nickname “Cookie” for her self-taught culinary skills and discerning palate, Polly enjoyed hosting annual candlelit dinner parties with her former husband John Neville Blakemore, Jr., that featured duck, dove, cheese grits, and chocolate mousse, all of which she made herself. She also cherished hosting holiday family gatherings that reflected her love for and joy in being a mother and making a home feel like a home. Polly further applied her interest in cooking and food to starting her own bakery for which she made an assortment of English muffin breads for sale at various local groceries under the name of Polly’s Bread. She continued to refine her artistic aptitude with drawing and painting classes and pursued her interest in French culture and language with regular trips to the Dordogne region of France. She spoke the language fluently, having learned it as a young woman after spending a year in Paris with her first cousin, Alice Zimmer Pannill. With both a mother and father who enjoyed gardening, she applied her own ability in this area to cultivating a flourishing assortment of ferns and other houseplants, one of which garnered a blue ribbon in the Kentucky State Fair one year. Polly also maintained an enduring interest in horseback riding and an abiding soft spot for underdogs, both animal and human. Over the years she rescued several abandoned dogs, two of which, Hobo Joe and Blaze, she nursed back to health and assumed care for herself. With people she could be deeply and instinctively sympathetic and spontaneously generous, endearing her to many and inspiring lifelong devotion among both acquaintances and friends. Polly is survived by her sister, Lee Cochran; her daughter, Mary Blair “Polly” Blakemore Cunningham (Bill); and her son John Neville Blakemore III (Jessica), as well as three grandchildren: William Wallace Cunningham III, Mary Blair “Polly” Cochran Cunningham, and Emmeline Rowley Pell Blakemore. Her family is grateful for the conscientious and dedicated care provided by Anita Swift and her colleagues: Jessie Gough, Rhonda Bacon, Shayra Clay, Delores Miller, and Sylvia Johnson. Polly especially enjoyed sitting in her sun room with them talking and tending to her small but thriving collection of orchids, all beneficiaries of her eye for beauty and elegant touch. Her family would also like to thank Dr. Laura Earnshaw and Melanie Wheeler of Hosparus for their care of Polly. Polly’s burial in Cave Hill Cemetery will be private. In lieu of flowers, the family requests that donations be made in her name to Hosparus (hosparushealth.org; 3532 Ephraim McDowell Dr., Louisville, KY, 40205).

The family of Mary Blair "Polly" Walker Cochran created this Life Tributes page to make it easy to share your memories.

Send flowers to the Cochran family.