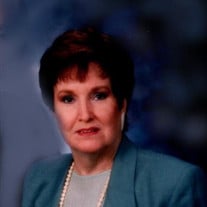 Mary Patricia Squires Bishopp, age 85, went to join her husband of 22 years, Robert Bishopp, in Heaven on Monday, March 2, 2020. He preceded her in death February 21, 2001. Known to her many friends as Pat; to her family she was always Patty. She was the second daughter born to her parents, Anne and Robert Squires, in McQuady, KY on October 12, 1934. She had no children of her own. Her older sister, Barbara S. Hardin, resides in Flower Mound, Texas. A younger sister, Judith S. Hicks and her husband, Thomas Hicks, live in Hardinsburg, KY. Patty was a special aunt to her nieces and nephews and their children. Ms. Bishopp accomplished much in her lifetime, including her sewing and needlework. Because she could not enter nursing school until the age of eighteen, she entered Bethel Woman's College for two years before enrolling in Baptist Hospital School of Nursing in Louisville. Shortly after graduating, she entered the United States Navy and served two years. Several years were spent nursing at old General Hospital in the emergency room. Upon becoming employed at Methodist Hospital, known now as Norton Pavilion, Patty was in charge of the operating room for many years. Wanting to advance in her career, she obtained a BSN Degree from Bellarmine and accepted the position of Vice President of Nursing, still at Methodist. Shortly after Norton Hospital acquired Methodist, she retired to spend her time with her husband, Bob, and travel. Upon his death, she and a retired nurse friend embarked on traveling the world covering all continents. Ms. Bishopp has resided at Traditions at Beaumont on Bardstown Road for nearly two years and her last few days were in Hosparus Care in Norton Pavilion. She was a wonderful nurse and will be missed greatly. Visitation will be at Pearson's, 149 Breckenridge Lane on Saturday, March 7, 2020 from 11 a.m. to 2 p.m. followed by the funeral at 2 p.m. Interment is in the Cave Hill Cemetery. Expressions of sympathy may be made to Kosair Children's Hospital, Ronald McDonald House, or Hosparus.

Mary Patricia Squires Bishopp, age 85, went to join her husband of 22 years, Robert Bishopp, in Heaven on Monday, March 2, 2020. He preceded her in death February 21, 2001. Known to her many friends as Pat; to her family she was always Patty.... View Obituary & Service Information

The family of Mary Patricia Squires Bishopp created this Life Tributes page to make it easy to share your memories.

Send flowers to the Bishopp family.