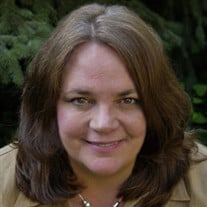 Ms. Mary Louise Allen, 57, passed away peacefully, May 5, 2019 at her home in Louisville, Kentucky. Louise was born in Nashville, Tennessee on June 1, 1961 to Mary Lou Creech and Ray Kaiser. She was a 1979 graduate of Atherton High School and later received a bachelor’s degree in political science from the University of Louisville. Louise was preceded in death by her father, her cherished grandmother, Helen Read Gibson, and by her deeply adored step-father of 34 years, Bill Creech – with whom she shared a kindred sense of humor and lightening quick wit. A diligent, generous, compassionate spirit, Louise shaped her life and career out of her devotion to public service and passion for land conservation. She began her 30 year professional journey as a planner for the Jefferson County Division of Planning and Development Services, quickly moving up the ranks to serve as Executive Director of Planning and Development in Oldham County. After retiring from government, Louise merged her love of service and land use development to Oldham Ahead, where she served as Executive Director for several years, overseeing key efforts to form Limestone Land Trust. In her time as Executive Director of Limestone Land Trust, Louise played an integral role in creating Kentucky’s largest regional land trust, Bluegrass Land Conservancy, where she worked tirelessly to preserve Kentucky’s Bluegrass Region forever. In addition to her work, Louise served as the Vice-Chair of the Kentucky PACE Board and President of the Kentucky Chapter of the American Planning Association and was a longtime member of the American Institute of Certified Planners. The impact of Louise’s preservation work in Louisville, Oldham County, the Bluegrass Region and Kentucky as a whole is unmatched. She will be deeply missed throughout the community; however, her memory will live on through her dedication to land preservation and will continue to be felt for generations to come. Louise lived life to the fullest. Her energy and enthusiasm for a wide range of interests included travel, photography, architecture, politics, entertaining, and caring for her adored rescue dogs, Simon, Sophie, and Sal, entirely loved and spoiled. Her beautiful life and legacy will be forever cherished by her son, John Allen, mother, Mary Lou Creech, her sister and best friend, Amy Sager (Scott), brothers Ray and Read Harris, all of Louisville. Nieces: Jessica Attaway, Maggie Goff, Sarah and Hattie Sager, Nephews: Nicholas Attaway, Kyle and Ryan Harris; and a host of friends, community members, and colleagues. At her core, family and friends came first in her heart. If she learned that you had no family or plans for the holidays, a place was made for you at her table. She was devoted to the well-being of those she loved and when she made friends it was a lifelong commitment. Too numerous to mention them all, the family would like to acknowledge Ken Rhodes, Rick Sweeney, and Dr. Karen Berg as among those she held dearest. We will miss her always and remember best the gales of her laughter. A visitation for Louise will be held from 5 to 8pm on Tuesday, May 14th at the Pearson Funeral Home, 149 Breckenridge Lane. A Celebration of Life service will follow on Thursday, May 16th, 2pm, at Flying Cross Farm, 9220 W U.S. Hwy 42, Goshen, KY 40026. Memorial donations may be made in her honor to the Bluegrass Land Conservancy, 450 Old Vine St Suite 105, Lexington, KY 40507.

Ms. Mary Louise Allen, 57, passed away peacefully, May 5, 2019 at her home in Louisville, Kentucky. Louise was born in Nashville, Tennessee on June 1, 1961 to Mary Lou Creech and Ray Kaiser. She was a 1979 graduate of Atherton High School... View Obituary & Service Information

The family of Mary Louise Allen created this Life Tributes page to make it easy to share your memories.

Send flowers to the Allen family.