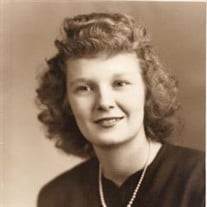 Martha Lee Goeing, 94, of Louisville passed away on March 3, 2022. Martha was born on November 9, 1927 to Roy and Margaret Swain Martin in Louisville. She was the oldest of three children (Martha, Helen, Harry). After high school Martha worked briefly for the Bell Telephone company and in 1947 married her first husband, William Perkins. They lived in Louisville where they had two children (Sondra and William Jr). Martha was a devoted wife and homemaker and raised her two children. After an extended illness William Sr. passed away in 1959. In 1968 Martha married John O. Goeing and they remained together until his death in 2004. Martha loved her children, grandchildren, great-grandchildren, plus her extended family and enjoyed visiting with them. She loved to play cards and at every family reunion she would be at the head of the table leading the card game. She loved bingo and in her younger years going dancing at the Moose Lodge. She was a long-time member of Holy Family Church and volunteered to work at the bingo, parish fair, and school cafeteria. Martha always loved a party and would be seen enjoying her Miller Lite. In the most recent years, as some family members moved to other states, she became competent at texting and loved receiving messages, especially photos from her family. When she received a photo, she often responded with “lookin good”. In addition to her husbands she was preceded in death by her brother Harry Martin and sister Helen Bullen. She is survived by her daughter Sondra Wilkins (Charles) of Goshen, Ky and son William Perkins Jr (Tammara) of Cocoa, Fl, as well as 7 grandchildren Deanna Strean (Flynt) of Charlotte NC, Heather Mason (Rick) of Apex, NC, Melissa Gerstein (Steve) of Huntersville, NC, Scott Wilkins of Crestwood, Ky, Jennifer Perkins of Port St. John, Fl, Michelle Perkins of Brooklyn, NY, and Michael Perkins of Melbourne, Fl. She was also blessed with 8 great grandchildren Stephanie Strean, Ryan Mason, Drew Mason, Ashlee Gerstein, Finley Gerstein, Michael Cox, Bryce Cox, and Peyton Anderson. A funeral service to honor Martha's life will be 12 pm at Pearson’s, 149 Breckenridge Ln. on Saturday March 26th. Visitation will be from 10:00 am to noon with private burial to follow at Cave Hill Cemetery. Arrangements under the direction of Pearson's "Where Louisville Goes To Remember".

Martha Lee Goeing, 94, of Louisville passed away on March 3, 2022. Martha was born on November 9, 1927 to Roy and Margaret Swain Martin in Louisville. She was the oldest of three children (Martha, Helen, Harry). After high school Martha worked... View Obituary & Service Information

The family of Martha Lee Goeing created this Life Tributes page to make it easy to share your memories.

Send flowers to the Goeing family.