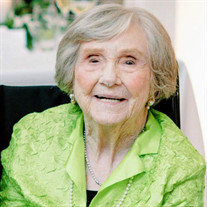 Martha Dupps, 93, died peacefully on April 14, 2021 at home surrounded by her family. Martha was born in Louisville on September 12, 1927 to James John and Ruth Stafford Hayes. She had three siblings, Ruth Hayes, Julia Crabtree, and James J. Hayes Jr., all of whom predeceased her. Martha grew up in the Highlands, close to all her Stafford cousins, and graduated from Atherton High School. She attended the University of Louisville where she was a member of Pi Beta Phi and met her future husband, Roger Paxton Madison. They married in 1948 and had three children who survive her, Douglas Madison (Stephanie), Bruce Madison (Linda), both of Louisville, and Nancy Harrison (Hugh) of Richmond, VA. Martha and Roger were married for 21 years until his untimely death in 1969. Martha married Ralph Louis Dupps in 1979 and happily gained three stepchildren and seven step grandchildren. Her stepchildren, Ralph “Dupper” Dupps Jr. (Ellen) of Hilton Head, SC, Kirk Dupps (Cynthia) of Eureka Springs, AR and Ann Kegley (Michael) of Louisville, all survive her. Martha and Ralph enjoyed 28 years of travel, couples golf groups and happy family celebrations and gatherings before Ralph’s death in 2007. Martha was a person of strong faith, growing up as a member of Highland Presbyterian and later becoming a member of Second Presbyterian. She committed her time and talents to both churches. As a mother of school age children with a real gift with “little ones,” Martha taught preschool at Highland Presbyterian, where she developed lifelong friendships with fellow teachers and proudly reveled in the lifetime accomplishments of her students. “You know I taught him as a four year old!” After Roger died, Martha accepted a full-time position at First National Bank, where she rose to be a Vice President in Commercial Banking. She retired soon after her marriage to Ralph so they could commute regularly to Tullahoma, Tennessee for Ralph’s work. Many years later she was excited to be the favorite substitute teacher at Second Presbyterian Preschool, getting to teach three of her great grandchildren, Hayes, Bowen and Hampton Johnson. Martha will be dearly missed by her grandchildren, who lovingly received some of her usually wise but not always requested advice, Page Johnson (Jay), Paxton Madison (Renee), Courtney Bradenham (Brad), Sarah Harrison (Sam Strasser), Hugh Madison, Amanda Cashen (Matt), Will Fishback (Jenny), Rally Dupps (Celia), Andrew Dupps (Anna Liz), Rebecca Edwards (Lee), Holly Ertel (Jay), KC Tucker (Joe), Courtney Rhein (Kristian), Michael Kegley, and five nephews, as well a still growing number of great grandchildren, all of whom provided Martha with great joy! A private family burial service will be held at Cave Hill Cemetery with a Memorial Service planned for May. Memorial donations may be made in memory of Martha to, Second Presbyterian Church, 3701 Old Brownsboro Road, 40207

The family of Martha Hayes Madison Dupps created this Life Tributes page to make it easy to share your memories.

Send flowers to the Dupps family.