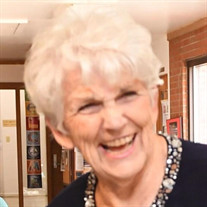 Marilyn Joyce Rutherford (née Kent) was born November 25, 1938 in Corvallis, Montana to Otto and Julia Kent. She graduated from Corvallis High School in 1956 and Montana State University in 1960. She married Robert William Rutherford on June 11, 1960 at St. Paul’s Episcopal Church, Hamilton, MT. Joyce and Robert made their first home in Ft. Wayne, IN. Soon after Robert’s work and their love for adventure had them moving several times until they took their biggest leap by moving overseas to Belfort, France. Two children, a new language, and new customs kept them on their toes. They quickly made friends, had two more children, and learned how to cook and entertain the “French” way. Long dinners, lots of wine and French cheese to end the meal. The time came to move back to the US for more adventures in New Hampshire, and finally they settled in Louisville, KY in 1977. Joyce loved music, from college days in the marching band to volunteering at the Center for the Arts in Louisville. She could sing any nursery rhyme that would always put smiles on any kid around. With their oldest son attending the University of Notre Dame they found their weekends filled with fencing tournaments, tailgating parties, cheering in the stands, and dinners at Rocco’s. University of Louisville basketball games and football games were enjoyed for years, and recently you could always find them at Louisville baseball games. Joyce and Robert loved to plan parties (lobster boils or backyard BBQs) and never let a derby go by without mint juleps and party hats and decor handmade by Joyce. If Joyce wasn't at home feeding the Plainview swim team or laying by the pool with friends, you could find her at work surrounded by children whom she loved to read to, sing with, or greet with sweet hugs. She retired from working as the Director of the Childcare Center at Baptist East Hospital in April 2000. After retirement she enjoyed volunteering for the Home of the Innocents' unwed mothers and children program. She was awarded Volunteer of the Year in 2008. When she wasn't volunteering she had the opportunity to spend time with her children, grandchildren, and unlimited time for travel. Her favorite was any warm destination but she was always a good sport when it came to skiing trips, hiking trips, African safaris, European excursions or wilderness backpacking. Joyce was an active member at several Episcopal churches in Louisville: St. Paul’s, St. Matthews, and St. Francis in the Fields. They served the congregation as youth group leaders and tent camp chaperones. They were ushers, pancake breakfast cooks, and supper club attendees. She was also a member of the Daughters of the King at St. Francis, where dear friendships were developed. Joyce was preceded in death by her grandson, Jean-Luc Rutherford, her parents, Otto Inghrame and Julia Lucy Kent, her brother, Herb Kent and her sister, Marcia Jean Richards. Joyce is survived by Robert, her husband of 60 years, her four children and their spouses, Scott (Ann), Marilyn (David), Alex (Jennifer) and Peggy, her remaining 7 grandchildren and their spouses, Theresa (James), Dominick (Jennifer), Martin, Julia (Sam), Jordan, Robert and Lauren, and her 5 great-grandchildren, Sebastian, Jeffrey, Genevieve, Stephen and Evelyn. A private committal service will take place on Saturday, October 24, 2020 at All Souls Chapel at Cedar Grove Cemetery in Notre Dame, Indiana. Following this service Joyce will be interred at Our Lady of Sorrows Mausoleum. A memorial service will be held at St. Francis in the Fields Episcopal Church, Louisville, Kentucky, at a later date to be determined. A special thank you to the outstanding nursing staff at Hosparus whom provided so much love and comfort. In lieu of flowers please consider a donation to the Home of the Innocents, 1100 E. Market Street, Louisville, KY 40206. "I can conquer the world with one hand as long as you’re holding the other". Joyce was always reaching for Robert's hand and they went through life holding each others hands. Together making one pair.

The family of Marilyn Joyce Rutherford created this Life Tributes page to make it easy to share your memories.

Send flowers to the Rutherford family.