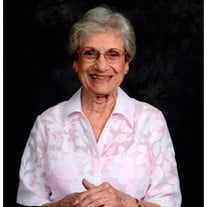 Marilyn Beverly Irons Pierce, 91, of Louisville, formerly of Warwick, Rhode Island (RI), passed away on March 6, 2020, at University Hospital following a terrible automobile accident. She was born September 22, 1928 in East Greenwich, RI and graduated from Classical High School in Providence, RI. As a young woman, Beverly was very active in the Assembly of the Order for Rainbow Girls of RI, where she eventually served as Worthy Advisor. She was active in the youth group of Washington Park Methodist Church in Providence where she met her future husband, Walter A. Pierce. She and Wally were married on October 15, 1949, and enjoyed 56 years of marriage before Wally’s death in 2006. In 1959, they became parents to Jennifer Lynn Pierce. They enjoyed spending weekends together during the summer sailing on their sailboat, the Scobewal, on Narragansett Bay and quahogging during low tide. Before moving to Louisville with Wally in 2004, she was an active member of the Greenwood Community Presbyterian Church in Warwick, RI, volunteering much of her time there and ringing handbells. Once moving to Louisville, she and Wally became members of Pewee Valley Presbyterian Church where Beverly was able to continue ringing handbells for several more years. Beverly was a volunteer of the Cobblestone Free Public Library and knitted thousands of infant hats for donation to newborn nurseries at Baptist East Hospital in Louisville and the Children’s Hospital in Providence, RI. She was preceded in death by her husband, Walter A. Pierce, and parents, Ernest N. and Alice Brown Irons. She is survived by her daughter, Jennifer L. Pierce, of Tuckahoe, NJ, her sister, Joyce Irons Reibling and brother-in-law Walter A. Reibling, nephew Kurt A. Reibling and his wife Katherine E. Reibling, niece Kimberly B. Reibling, all of Louisville, and niece Kristen P. Reibling of Indianapolis, IN. She is also survived by two great nieces, three great nephews, and one great-great niece. A memorial service will be held at 2 p.m., Saturday, March 14 at Pearson's, 149 Breckenridge Lane. Visitation will be from 12 p.m. until time of service.

The family of Marilyn Beverly Irons Pierce created this Life Tributes page to make it easy to share your memories.

Send flowers to the Pierce family.