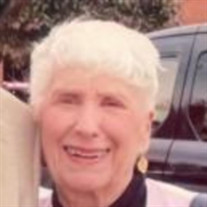 Marilyn Rose Kenealy left this world on Sunday September 12, 2021 at the age of 99. She was born in Key West, Florida on April 9, 1922, the only child of Dorothy Reeder Rose and Rear Admiral Earl Griffith Rose USCG. She was predeceased by her parents and her husband of 60 years, William J. Kenealy, who served as a Federal Mediator and labor arbitrator for decades. Subsequently, she spent many happy years with her partner, Harold G. Wren, former dean of the University of Louisville Brandeis School of Law, who passed away in June 2016. She is survived by her daughter, Anne Kenealy, son William R. Kenealy and his partner, Janet Conklin, and former daughter-in-law, Fran Cotsarelis Kenealy, and grandsons Christopher, Timothy, and Daniel Kenealy, and Samuel Lindenfeld. Marilyn Kenealy attended many schools across the U.S., as her father moved the family from Coast Guard duty stations from Juno, Alaska to Staten Island, New York. When asked where she was from, she often answered “the coasts”. She attended Hollins College and then graduated at the head of her class from George Washington University with a degree in social work. During WWII she was employed as a social worker in Washington and Pennsylvania. On the day of his return from service as a bomber navigator with the U.S. Army Air Force, she and William Kenealy married in her parent’s home in Alexandria, VA. While her husband finished his undergraduate and graduate degrees at George Washington University and Columbia University, she worked as a social worker. In Washington, DC, she helped older, hard-to-place orphans be adopted. In New York City, she found placements for foster children in Hell’s Kitchen and Manhattan with the Catholic and Jewish Children’s Agencies. She was a life-long liberal Democrat and voracious reader, often reading two to four books per month and the New York times and the Courier-Journal daily until the last years of her life. Over the last two years of her life, she was cared for in her home by a team of caregiving angels, including Debbie, Rose, Brandi, and Pam. In her final days she received excellent care at the Baptist East Palliative Care Unit and Hosparus. Her family is grateful to have had Marilyn for so long and that she was able to enjoy many years of a fulfilling life. She was a pragmatic, caring person and lifelong learner. At her direction, there will be no service. At a later date her ashes will be cast from the USCGC Cutter Ingham, now moored at the USCGC Ingham Memorial Museum in Key West, Florida. Commanded by her father during World War II, this ship is the only Coast Guard Cutter afloat today to receive two Presidential Unit Citations for extraordinary heroism in action against an armed enemy and continues to be dear to our family. In lieu of flowers, Marilyn asked that donations be made to The Council on Disabilities, 2214 Dudee Road, Suite A, Louisville KY 40205 www.the-council.org.

Marilyn Rose Kenealy left this world on Sunday September 12, 2021 at the age of 99. She was born in Key West, Florida on April 9, 1922, the only child of Dorothy Reeder Rose and Rear Admiral Earl Griffith Rose USCG. She was predeceased by her... View Obituary & Service Information

The family of Marilyn Rose Kenealy created this Life Tributes page to make it easy to share your memories.

Send flowers to the Kenealy family.