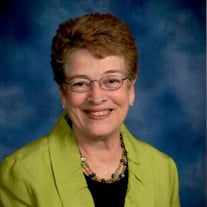 Marianne Carter Humphries lived a life deserving of immense celebration. She passed, peacefully asleep and surrounded by family, love, and prayer, after a very quick battle with leukemia. She met this diagnosis not with fear, but with conviction, as she told the oncologist and nurses, “I am a woman of faith.” And though her passing was abrupt, it meant that her whole life, right up to the end of her time on Earth, was dedicated to giving, teaching, and serving. Marianne was born in Louisville in 1942, to Mary and Raymond Carter. An only child, she enjoyed particularly close relationships with both parents. She graduated from Kentucky Home School in 1960, and was a very proud 1964 graduate of Transylvania University, where she was a Sister in Chi Omega and received a Bachelor’s Degree in Education. Throughout her life, Marianne was known to many people by many names—Mom, Nana, Mrs. Humphries, and Marianne—as she devoted her life to helping others in any way she could. First as a mother to her three children—Drew, Sean, and Amy—in whom she instilled a drive to seek out the best in every person, and to live life with kindness and intention. As an educator for 35 years, most of which were in Jefferson County at Minors Lane Elementary School, she shaped countless lives both as a classroom teacher and as a Reading Recovery specialist. Marianne’s greatest joys and sources of pride were her six grandchildren—Carter, Jacob, Sean, Isobel, Layla, and Beau. As she would say, her greatest blessings called her “Nana!” Nana imparted so many lessons and teachings in her grandchildren, who are honored and privileged to carry on her legacy on Earth. Not only did she pass along interests in everything from politics to sports and education to literature, but she passed along values in the importance of faith and family. Most importantly, she lived her life as an example of kindness and strength, selflessness and service, and unconditional love. We are immensely grateful to have had the presence and love of such a wonderful woman, and will continue to treasure the light which her life brought to all of us. Marianne’s children may have said she served on too many committees—suffice it to say, she was phenomenally involved all through her life. As a member and elder of Harvey Browne Presbyterian Church, she was honored to bring her talents to the Church. She was a Session Member, a board member of Harvey Browne Preschool, and served on countless committees for the works of the church. Most recently, she has served on the Pastor Nominating Committee, where she was able to contribute her vision and love of Harvey Browne and her church family. Outside of Harvey Browne but still within the Presbyterian Church, Marianne’s immense experience and faith led her to be selected to serve on the Commission on Ministry for the Presbytery of Mid-Kentucky for the past six years; and she has served for many years on the board of the Louisville Presbyterian Seminary’s Furlough Home. Marianne has served Down Syndrome of Louisville in many capacities throughout her life, as she continued the work of their founder, her mother, Mary Carter. She was recognized for this work, receiving the honor of being named their Volunteer of the Year, especially recognizing her close friendships with Katherine and Brian. Of course, Marianne was involved with many other groups and causes. She held numerous offices in educational sororities Alpha Delta Kappa and Delta Kappa Gamma, and was on the executive board of the Jefferson County Retired Teachers Association. Recently, she has worked with the Mission Behind Bars project to mentor citizens returning to society. These organizations, and many others, were immensely lucky to have her contributions and support. Marianne is preceded in death by her parents, Mary and Raymond Carter, and her beloved son, Sean Humphries, who passed away in 1988. Though we mourn as her family on Earth, we take great comfort knowing the joyous and long-awaited reunion currently taking place. Marianne is survived by her son Drew Humphries and his wife Melanie, and their children Jacob, Isobel, and Layla; by her daughter Amy Squires and her husband Jason, and their children Carter, Sean, and Beau; by her former husband, Dr. Raymond Humphries; by her Harvey Browne Presbyterian Church family; and by her countless dear friends. As her family, we wish to express heartfelt gratitude for the nurses and medical team in the ICU and Oncology Unit at Norton Women’s and Children’s Hospital, for offering their loving care. Funeral service will be held at 11 a.m. on Saturday, December 28, 2019 at Harvey Browne Presbyterian Church, 311 Browns Lane with burial in Cave Hill Cemetery. Visitation will be from 4-7 p.m. Friday at Pearson’s, 149 Breckenridge Lane. And, in lieu of flowers, donations can be made to either the Sean Humphries Memorial Youth Scholarship Fund at Harvey Browne Presbyterian Church, Harvey Browne Presbyterian Church general fund or to Down Syndrome of Louisville.

Marianne Carter Humphries lived a life deserving of immense celebration. She passed, peacefully asleep and surrounded by family, love, and prayer, after a very quick battle with leukemia. She met this diagnosis not with fear, but with conviction,... View Obituary & Service Information

The family of Marianne Carter Humphries created this Life Tributes page to make it easy to share your memories.

Send flowers to the Humphries family.