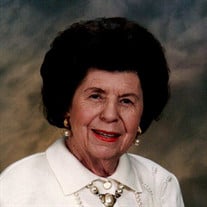 Marguerite Ann Pool McCain "Peggy", 93 of Louisville, died peacefully at her residence Thursday October 14, 2021. She was born in Jeffersonville, Indiana on March 11, 1928. She was a graduate of Jeffersonville High School in 1946 and Indiana University with a B.S. in Education and Journalism in 1950. She was the editor of the school newspaper and an avid reader. She worked as a teacher at Jeffersonville High School. She was the loving wife of Dale Theodore "Ted" McCain, founder of Ted McCain Company, who died in 2006. She was a world traveler and avid golfer and bridge player. She was a member of Big Spring Country Club for over 50 years and a member of Mariner Sands Country Club in Stuart, Florida. She was a member of the Woman’s Club of Louisville. She was a member of Christ Church United Methodist since 1961. She was a big fan of the show Dancing with the Stars and we all know she is now dancing in the stars in heaven. Along with her husband of 56 years, she is preceded in death by her parents, James and Leizetta Pool, her sisters Dorothy Jean and Joan Pool and her great-grandson Ian Bockting. She is survived by her daughters, Peggy "Dee" Metzger (Glenn) of Louisville and Susan Baron (Don) of Scottsdale, Arizona. Two granddaughters, Alesha McKinney (John) and Jessi Bockting (Adam) and bonus granddaughter Laurel Lippay (Norm). 7 great grandchildren and numerous members of adoring family and friends. The family is especially grateful of her caregivers Delores Beck, Lauren White and Becky Yealu and all the special angels from Hosparus Health of Louisville and Granny Nannies of Louisville. Her Funeral service will be held Monday October 18, 2021 10:30 am at the sanctuary of Christ Church United Methodist, 4614 Brownsboro Road Louisville with visitation Sunday October 17 from 1:00 - 4:30 at Pearson’s, 149 Breckenridge Lane. A separate service will be held at Mariner Sands Country Club in Stuart, Florida at a later date. Memorials may be sent to Hosparus Health of Louisville, 3532 Ephraim McDowell Drive, Louisville, KY 40205.

Marguerite Ann Pool McCain "Peggy", 93 of Louisville, died peacefully at her residence Thursday October 14, 2021. She was born in Jeffersonville, Indiana on March 11, 1928. She was a graduate of Jeffersonville High School in 1946 and Indiana... View Obituary & Service Information

The family of Marguerite Ann Pool "Peggy" McCain created this Life Tributes page to make it easy to share your memories.

Send flowers to the McCain family.