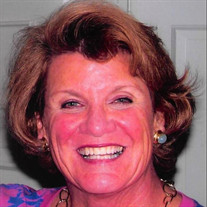 Margaret Taylor Skelly Strange August 22,1947 born in -Wilmington DE, age 72 Passed in the comforts of her home with on June 5, 2020 surrounded by family in Louisville, KY. Margy was raised in Wilmington, DE she was the second of 3 children. Her parents were James T Skelly Jr. of Wilmington DE and Margaret Taylor of Louisville, KY. She graduated from Grier School in 1965 in Birmingham Pennsylvania. She then attended Marymount College in Boca Raton, FL. On March 31,1967 she married Theodore Booth Strange Jr. and moved to Memphis TN. In late 1970 they moved to Louisville, KY in PeeWee Valley with their 2 children Teddy and Christy. In 1976 they moved to Anchorage Ky were she raised her children and lived for 25 years. She embraced the Anchorage community and volunteered with various organizations. Margy had a big connection to the local theater communities there and was on the board of Anchorage Children’s Theater and Mummers and Minstral’s.They then moved to Indian Hills, in the Louisville area where they built their house together and lived for the last 25 years. Margy and Ted have also spent over 20 years enjoying the community of Ocean Ridge, Fl where they spend winters. St. Francis in the Fields Episcopal Church in Louisville played an enormous part in her life. She received great joy in her role as Head of Pastoral Care for several years. The church has long been a safe haven for both of them. Margy and Ted’’s beautiful friendship and love story began when they met in dancing school in the 4th grade in Wilmington.Delaware and has grown stronger with each passing day for over 53 years of marriage.They have literally grown up together. Margy will be best remembered for her sweet, kind and generous spirit and her wonderful sense of humor, which so many have come to adore. She loved spending time on the golf course with buddies and Ted, keeping it light for the competitive ones around her. Her grandchildren Simon and Miles Strange Potter call her Gigi, she adored them with all her heart as well as her son in law Bryan Potter. She loved taking family vacations with them locally and exciting far away places. Gigi, was a wonder and joy as a sister, daughter, wife, mother and grandmother who dedicated herself to connection to all those around her. Margy is survived by her husband Ted, her children Teddy and Christy and (Christy’s husband Bryan Potter and her grandchildren Simon (14) and and Miles (11) and her brothers Jimmy and Leland. The family wishes to give special thanks to the extraordinary outpouring of their community of friends and family. We have enjoyed having the buzzing angels- dropping off meals, flowers, cards, errand runs, doing whatever was needed no questions asked. It truly has made this high speed chase somewhat bearable and we are humbled by the love given at this difficult time. A memorial service will be held in the future at St. Francis in the Fields Episcopal Church, due to Covid 19, visitations and burial services will be scheduled in the future as well. Arrangements under the direction of Pearson's. In lieu of flowers, the family requests that memorial gifts be given to “The Arbor Society” at St. Francis in the Fields Episcopal Church 6710 Wolf Pen Branch Road; Harrods Creek, KY 40027

Margaret Taylor Skelly Strange August 22,1947 born in -Wilmington DE, age 72 Passed in the comforts of her home with on June 5, 2020 surrounded by family in Louisville, KY. Margy was raised in Wilmington, DE she was the second of 3 children.... View Obituary & Service Information

The family of Margaret Taylor Skelly Strange created this Life Tributes page to make it easy to share your memories.

Send flowers to the Strange family.