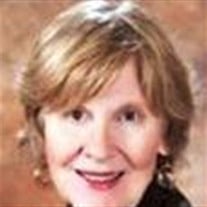 Marcia Richmond Morgan, 65, passed away on Wednesday, April 10 after a long battle with cancer. She was born on July 31,1953 in Williamson, West Virginia to Ola Mae (McCoy) and Garnet Richmond. Marcia graduated from the University of Kentucky in 1977 and began her career in public service in Frankfort, KY at the Kentucky Heritage Council where she met her husband, David Morgan. She served as chief of staff to then-Kentucky Attorney General Fred Cowan, lead the Cabinet for Health Services as Secretary under Governor Paul E. Patton, headed the legal support services division in the Natural Resources Cabinet, and was director of performance audits for then-Kentucky Auditor of Public Accounts Crit Luallen. Following her career in Kentucky State Government, Marcia moved to Washington, D.C. and became a partner in Alicia Smith & Associates, a nationally recognized healthcare consulting company. Throughout her career, Marcia was recognized for her commitment to developing and delivering effective public policy through innovative solutions. During their 39-year marriage, Marcia and David opened their homes in Lexington, KY, Washington D.C., and Louisville as a gathering place for their many friends and colleagues, and were the sites of many fundraisers, celebrations and causes ranging from historic preservation to furthering Democratic Party representation on all levels. Left to cherish her memory is her husband David, granddaughter Eva Morgan, sister Garnet Richmond, and many friends in both Kentucky and Washington, D.C. She is preceded in death by their son Ned Morgan, her parents and sister Janice Maynard. Marcia was known for her fierce loyalty, strength of character, sharp wit, strong faith and her unwavering commitment to Democratic ideals. Visitation is Sunday, April 14, 2:00 - 4:00 p.m. at Pearson’s Funeral Home, 149 Breckinridge Lane, Louisville, KY. The celebration of Marcia’s life is Monday, April 15, 1:00 p.m. at Highland Presbyterian Church, 1011 Cherokee Road, Louisville, KY. Memorial contributions may be sent to: University of Kentucky Markey Cancer Center, 800 Rose Street, Pavilion CC, Lexington, KY 40536, https://ukmarkey.org/cancer-stops-here/, and Kentucky Refugee Ministries, 969-B Cherokee Road, Louisville, KY 40204, https://kyrm.org/give/donate-funds/

Marcia Richmond Morgan, 65, passed away on Wednesday, April 10 after a long battle with cancer. She was born on July 31,1953 in Williamson, West Virginia to Ola Mae (McCoy) and Garnet Richmond. Marcia graduated from the University of Kentucky... View Obituary & Service Information

The family of Marcia Richmond Morgan created this Life Tributes page to make it easy to share your memories.

Send flowers to the Morgan family.