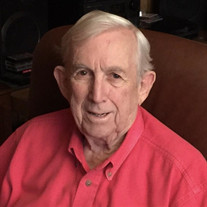 March Wells Jr., 90, of Louisville, KY., passed Thursday, March 21, 2019. Born in Grand Rapids, MI., son of the late Helen Lee and March Wells Sr., “Mike” moved to McLean County , IL at an early age. Graduated from Trinity High School (Bloomington, IL.) and earned his college degree in economics from University of Miami (FL). He was a member of Phi Gamma Delta fraternity. Mike joined the Navy in 1951, attaining the rank of LTJG and traveled to both the Arctic and Antarctic. He was employed by Dealer’s Transport for many years and owned three Big O Tire stores. Mike was a member of the Rotary and a Kentucky Colonel. He was also a charter member of Hunting Creek Country Club. One of Mike’s greatest passions was coin collecting, particularly large cents. He was president of the Early American Copper Society from 1999-2002, and was active until his death. University of Louisville sports, especially basketball, provided Mike with decades of enjoyment as he was a season ticket holder for more than 50 years. Golf was also a regular source of amazement and amusement; he shot his age at both 77 and 78! March Wells Jr. was a wonderful father, a loving grandfather, a devoted and gracious husband and a dear, great friend. He was preceded in death by the love of his life, his wife of 49 years, Sara Funk Wells. He is survived by sons, March Wells III (Marcia), Saline, MI., John L. Wells (Lori), Columbia, MO., Paul W. Wells, daughter Amy Wells Gruner (Paul), daughter-in-law Kimi Day Wells, all of Louisville, and six grandchildren, Isaac, Michaela (MI), Morgan, Sara (MO), Patrick, Benjamin (KY). A Celebration of Mike’s full and joyous life will be held at Hunting Creek Country Club, 6807 Foxcroft Rd. Prospect, KY., from 5-8 P.M. on Thursday, March 28, 2019. A graveside service will take place in Funk’s Grove Cemetery, IL at a later date. In lieu of flowers, the family requests that memorial gifts be made to the charity of your family’s choice.

The family of March Wells Jr. created this Life Tributes page to make it easy to share your memories.

Send flowers to the Wells family.