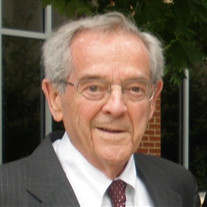 Lyle G. Spalding left this world on September 10, 2019 just one week prior to his 91st birthday. Lyle was preceded in death by his loving wife of 64 years, Lola Drew Spalding. They were blessed with four children, nine grandchildren and one great-granddaughter. Son David (Marianne) of Ames, Iowa, children Andrew and Megan; daughter Jane (Paul) of Madison, Mississippi, sons Tim and Travis; son Jeffrey of Louisville, daughter Aundrea and granddaughter Cartney; and son Michael (Ronda) of Sterling Heights, Michigan, sons Caleb, Trent, Ty and Caden. There were many happy vacations at lakes, beaches, National Parks and historic sites. A joyous tradition was the family gathering each Thanksgiving. Lyle was a WWII era Marine veteran and graduate of Dartmouth College where he was a member of Sigma Chi Fraternity and the prestigious Casque & Gauntlet Senior Society. He joined General Electric Company’s Financial Management Program in Schenectady, N.Y. in 1952 and served on the GE Corporate Audit Staff before accepting a position with the Major Appliance business in Louisville. During his 33-year career, he managed Human Resources, Finance, Sales and Product Distribution organizations. Upon retirement, he led the GE Volunteer Service Center for three years matching potential GE volunteers with local charitable agencies. Subsequently, he volunteered at Exploited Children's Help Organization (ECHO), American Red Cross, The Cabbage Patch Settlement House and at Home of the Innocents where he was also a long-time Board and Committee member. Among his honors are: Jefferson County declared him a Millennium Maker in 2001, the First Capital Bank’s Deep Roots Award in 2003, GE Global Senior (Elfun) Volunteer of the Year in 2005, a Certificate of Appreciation from the Commonwealth of Kentucky for his volunteer service and Home of the Innocents’ Volunteer of the Year. He was a long-time member of the Episcopal Church and led and served on the governing boards of St. Matthew’s and St. Mark’s Churches in Louisville. He also served for many years on the City Council of the City of Indian Hills. Lyle was fortunate to have had a successful business career, a wonderful family life and personal satisfaction through community service. Lyle’s Celebration of Life will be on Saturday, September 28, 2019 at 10:00 a.m. at St. Matthews Episcopal Church at 330 N. Hubbards Lane. Visitation will be Friday, September 27, 2019 at Pearson’s Funeral Home at 149 Breckenridge Lane from 4-6 p.m. Remembrances may be made to the Home of the Innocents, The Cabbage Patch Settlement House or your favorite charity.

Lyle G. Spalding left this world on September 10, 2019 just one week prior to his 91st birthday. Lyle was preceded in death by his loving wife of 64 years, Lola Drew Spalding. They were blessed with four children, nine grandchildren and one... View Obituary & Service Information

The family of Lyle G Spalding created this Life Tributes page to make it easy to share your memories.

Send flowers to the Spalding family.