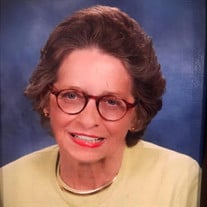 Louise Baker Seiler, 86 died peacefully at her home on February 8, 2022. Born to Stuart Lisle Baker, Jr. and Mary Elizabeth Turner Baker in Frankfort, KY, she moved to Louisville in 1937 when her father was appointed Secretary of the Courier-Journal. Louise grew up in the Brandeis House (Ladless Hill Farm) on Longview Lane and graduated from Louisville Collegiate School in 1953. She attended the University of Wisconsin and graduated from University of Louisville. In 1957, she married John G. Seiler, Jr. (Jack) and they started their life together in the Greenhill Apartments on Brownsboro Road. Soon after she became a stay at home mom with three very active sons (John, Jim and Joe) and in 1968, the family moved to Rolling Fields. In 1974, after the tornado destroyed their house, Louise rejoined the work force and worked at Schaaf Galleries, Tweed and Tartan and ultimately as the manager for Carol Reed. She supported Jack’s career as a banker and worked to keep the family together after they rebuilt their home and their lives. She was extremely proud of her three sons and their wives, which she always thought of as daughters rather than daughters in law. Louise was a voracious reader and loved crossword puzzles, especially the New York Times. She loved playing bridge with her friends, attending the orchestra and playing her piano. She was a member of the Louisville Country Club and Second Presbyterian Church. She was a supporter of many organizations including Locust Grove where she volunteered, the Fund for the Arts, Dare to Care, the Salvation Army, Family Scholar House and Centre College. Louise was predeceased by her parents, her sisters Mary Stuart Baker Kimmel and Betty Baker Leete and her husband, Jack Seiler. She is survived by her three sons and their wives, Dr John G. Seiler III (June), James B. Seiler (Robin) and Joseph C. Seiler (Kelly), eight grandchildren, three great grandchildren, her brother R. Lisle Baker (Sally) and a beloved extended family and many dear friends. The family would also like to thank her wonderful caregivers, Cindy Hornback and Cherise Williams who allowed Louise to live at home and remain independent until the end of her days. Visitation will be at Pearson’s, 149 Breckenridge Lane on Friday, February 11, 2022, from 3pm until 7pm. Funeral service will be at Second Presbyterian Church 3701 Old Brownsboro Road on Saturday, February 12, 2022 at 12 noon. https://www.youtube.com/channel/UCaPZFXiwjhU_byxHdZYH-WA Memorial donations may be made to the Lisle Baker Scholarship Centre College Development Office, 600 West Walnut St. Danville, KY 40422, Second Presbyterian Church Music Fund, any of organizations above or the donor’s choice. Arrangements under the direction of Pearson's, "Where Louisville Goes To Remember."

Louise Baker Seiler, 86 died peacefully at her home on February 8, 2022. Born to Stuart Lisle Baker, Jr. and Mary Elizabeth Turner Baker in Frankfort, KY, she moved to Louisville in 1937 when her father was appointed Secretary of the Courier-Journal.... View Obituary & Service Information

The family of Louise Baker Seiler created this Life Tributes page to make it easy to share your memories.

Louise Baker Seiler, 86 died peacefully at her home on February...

Send flowers to the Seiler family.