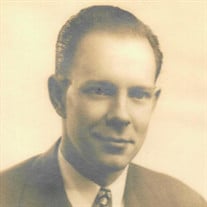 Louis Franklin Zelle was a Christmas baby, born on December 19, 1917 in Chanute, Kansas. This means he shared the experience familiar to every Christmas child: to receive one-fers - combined Birthday/Christmas gifts - for his entire life. In his case, this ended up being104 Christmas/birthday one-fers which he accepted with easy humor and gratitude for gifts received. In fact, maybe because he was a Christmas child, Lou, or Louie, or Louis Franklin, or Daddy, or Grandpa Lou - depending on your relationship to him - displayed a cheerfulness and generosity of spirit throughout his life and in almost every circumstance, culminating in his later years in that mindset so beautifully expressed by the Apostle Paul, “I am content in all things because to live is Christ and to die is gain.” Lou-Daddy-Grandpa, as he used to sign his emails until macular degeneration forced him to give up his computer, was also part of a select group that survived two global pandemics in little over one hundred years. Although he was cut off from face to face visitation for the last fourteen months of his life, Lou kept in touch with family and friends through frequent phone calls - daily with his beloved sister Jane. When vaccinations became available, he was at the front of the line in the hope that in person visits would return sooner than later. It is impossible to summarize a life that spans more than a century, so to get a sense of his adult years it might be useful to consider four distinct eras: Africa, Seminary, Ministry, and life after Ruth’s death. Ruth was an integral part of the first three and her absence shaped his fourth. In the Africa years, we see a young Lou and Ruth - 28 and 30 - striking out as Presbyterian fraternal workers to the barely post World War II French Cameroon with an infant and three year old in tow. Once at the mission station they quickly became part of the missionary community. Lou taught industrial arts and surveyed yet to be built roads. Ruth cared for the children and managed the household. Three years into what they had intended to be a lifetime commitment, the unbearable happened when their now three year old son died from what initially seemed to be a typical childhood fall. Davey’s death, combined with educational concerns for their six year old daughter, Carla, they returned to the States and Lou took over the family’s grain dealership in Central Illinois. After two more children - Catherine and Stephen- and more than a decade of resisting the call to ministry, Lou started seminary in Louisville in the fall of 1963. Ruth returned to work after years away and became a social worker. It was an exciting time, being right in the middle of the civil rights movement in which he was active. Graduating from seminary at the age of fifty, he still managed to put in thirty years of solid ministry, finally retiring at eighty. After Ruth’s death in 2004, Lou moved into Brownsboro Park where he became the unofficial but very real resident chaplain, teaching Bible studies, serving communion, and even officiating at staff weddings. His move to the Episcopal Church Home at the age of 100 saw much reduced activity but he still stayed active and welcomed visitors on an almost daily basis. He never stopped preaching the gospel, liking to say, “I want to take as many of you as I can to heaven!” The end came quickly and his mind was sharp to the very end. Six days before his death he phoned a family member and insisted that they write down the birthdate of every family member (three living children and their partners, five grandchildren and their partners, and five great grandchildren with another one on the way)and promise that they would continue what he had started: making sure that the whole family was informed at the start of every month of whose birthdays were coming up. Which is a fitting and slyly humorous last request from a Christmas baby accustomed to receiving one-fers.

Louis Franklin Zelle was a Christmas baby, born on December 19, 1917 in Chanute, Kansas. This means he shared the experience familiar to every Christmas child: to receive one-fers - combined Birthday/Christmas gifts - for his entire life. In... View Obituary & Service Information

The family of Louis Franklin Zelle created this Life Tributes page to make it easy to share your memories.

Louis Franklin Zelle was a Christmas baby, born on December 19,...

Send flowers to the Zelle family.