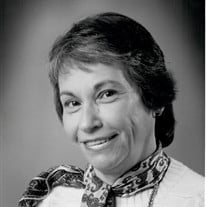 Lois Cooper Haynie, 88, a.k.a "The" Lois, passed away Jan 4, 2021. At one time, she was a household name. Her husband, famed Courier Journal political cartoonist, Hugh Haynie, cleverly concealed her name in his elaborately drawn cartoons. Hugh appeared in over 80 newspapers, and "Finding Loises" was a daily ritual for thousands. Born Sept 6, 1932, in Norfolk, Va. to a modest Coast Guard family, hers was an improbable life. In 1953, she was working as a fashion artist and copy writer at the Richmond Times Dispatch newspaper, when their dashing new cartoonist swept her off her feet. Liberal and passionate, they married, honeymooning in Washington, D.C. to watch Thurgood Marshall argue Brown v. Board of Education before the U.S. Supreme Court. Hugh drew for newspapers in Atlanta and Greensboro. Then, in 1958, Barry Bingham hired him, and Lois and Hugh moved to Louisville. They hosted elaborate parties and tooled around town in matching yellow E-Type Jaguars. Lois was always active in politics. In fact, she was Chairwoman of the Kentucky Delegation at the 1968 Democratic National Convention in Chicago, during the riots. She was close friends with countless politicians, but it was her association with the Kennedy White House that she held most dear. JFK and Hugh had become friends when Kennedy was a Senator. When JFK became President, Lois and Hugh were routinely invited to the White House for both formal and informal events. Many of the White House Press Corp, Staff and Secret Service remained her lifelong friends. Lois was an immensely talented artist in her own right. She was a fashion illustrator, and an art dealer with the Swearingen-Haynie Art Gallery. She finished her career at KET, where she worked for years as a writer and producer. When she retired, Lois moved to The Glenview Condominium, where she made many more friends, and hosted many more cocktail hours. She loved playing bridge with her friends. She was a voracious reader and a ferociously proud mother. She had a good life. Lois is predeceased by her parents, William and Nina Cooper, her only sibling, Steven Cooper, and her former husband Hugh Haynie, with whom she reconnected shortly before his death. She is survived by her son, Judge Hugh Smith Haynie, and daughter-in-law, Judge Anne Haynie. Lois is also survived by a niece, Diane Cooper-Gould, of Reston, Va.; a nephew, Sean Cooper, of Reston, Va.; and her long-time friend, Jane Grady, who was so good to Lois for over 30 years. As well as many kind and thoughtful friends. Due to the pandemic, there will be no visitation. However, memorial gifts may be made to The Filson Historical Society, 1310 S. Third Street, Louisville, KY 40208 for the archiving of the "Hugh Haynie: Best of the Best Collection", recently donated by the Haynie family, which includes Hugh's original Christmas cartoon. (see: hughhaynie.com) There will be a brief graveside service at Cave Hill on Monday, January 11 at 2:00 p.m. Please meet no later than 1:50 p.m. at the Grinstead Drive entrance.

Lois Cooper Haynie, 88, a.k.a "The" Lois, passed away Jan 4, 2021. At one time, she was a household name. Her husband, famed Courier Journal political cartoonist, Hugh Haynie, cleverly concealed her name in his elaborately drawn cartoons. Hugh... View Obituary & Service Information

The family of Lois Cooper Haynie created this Life Tributes page to make it easy to share your memories.

Send flowers to the Haynie family.