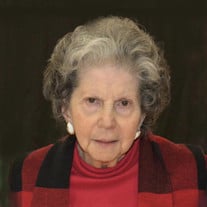 Lois Marie Erwin, 90, passed away peacefully at Belmont Village on Tuesday, December 1, 2020. Lois was born in Louisville on March 28, 1930 to the late Francis O. Fogle and Elizabeth L. Gilkey. She was a 1948 graduate of Mercy Academy. In addition to her parents, she was preceded in death by her husband of 49 years, Harold Erwin, an infant grandson Jason Doering, and a sister, Carolyn McPhillips. She resided in Clarksville, IN, for many years where she and Harold raised their three children. Lois worked part time as a secretary for the Henderson Law Office and Jacobi & Tombs Engineering. Lois was a long-time member of St. Anthony of Padua Catholic Church in Clarksville. She was a member of Clarksville Business and Professional Women’s Club since 1972. She served in a number of executive positions. Her hobbies included sewing, quilting, crafts, reading, travelling and her dedication to BPW. Her survivors include two daughters: Sherry Erwin Atwood (John) of Virginia Beach, VA and Phyllis Jean Petot (Bill) of Louisville, KY; one son, James H. Erwin (Holly) of Louisville; three grandchildren, William James Petot VI, Christopher Robert Petot, Isaac Bach Erwin; and great-grandchildren, Estelle Morris and Farrah Lucille Petot. She is also survived by her “baby” sister, Francis Oleta Williams. In lieu of flowers the family requests that donations in Lois’s memory may be made to the Hosparus Health of Louisville or Mercy Academy. We would like to thank her Belmont family for the excellent care they provided, especially Tessa and Shai. Due to Covid restrictions a private ceremony will be held at the Pearson Funeral Home with burial following at Resthaven Memorial Cemetery. Condolences may be shared at www.pearsonfuneralhome.com

Lois Marie Erwin, 90, passed away peacefully at Belmont Village on Tuesday, December 1, 2020. Lois was born in Louisville on March 28, 1930 to the late Francis O. Fogle and Elizabeth L. Gilkey. She was a 1948 graduate of Mercy Academy. In addition... View Obituary & Service Information

The family of Lois Marie Erwin created this Life Tributes page to make it easy to share your memories.

Send flowers to the Erwin family.