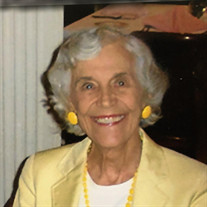 Lois "Scottie" Hickok Allen passed from this earth on July 21, 2021. Born in Montclair, NJ on March 15, 1932, she was the oldest of three daughters to Willard Hugh Hickok and Helen Gardner. They moved to Louisville in 1941 and she attended Ballard School and later Atherton H.S. She graduated from the University of Missouri with a degree in Journalism and later worked for the University of Louisville and wrote for the Courier Journal. Married in 1954, with husband Robert they built a life together raising four sons while running the W.L. Allen Lumber Co. She opened her home and her heart to family and friends. She loved conversations about family, music, literature and world affairs, and to write letters with perfect grammar in English or in German. She became proficient on her computer and spent hours keeping everyone current on births, birthdays, graduations and anniversaries. After Robert’s death, she traveled on her own to Germany every year to visit friends. She was preceded in death by her husband Robert L. Allen, and two sons Bruce and Brian. She is survived by sons Mark Allen of Stafford, Virginia, and Todd Allen of Centennial, CO., their wives Kim and Nancy, her sister Tamara Dimmitt, step grandchildren Tyler and Brittany Evans, grandchildren Norman and Veronika Allen and countless nieces, nephews and cousins who adored her. Visitation will be 2-4 pm Saturday July 24, 2021 at Pearson’s, 149 Breckenridge Lane with a Celebration of Life at 4pm. There will be a private burial at Resthaven Cemetery. Donation checks preferred in lieu of flowers made out to the American Foundation for Suicide Prevention (AFSP Kentucky) mailed to the address below. Please include Lois Allen or Brian Allen in the memo line so donations are applied to the appropriate area. AFSP Kentucky, 9152 Taylorsville Road, #274, Louisville, KY 40299

Lois "Scottie" Hickok Allen passed from this earth on July 21, 2021. Born in Montclair, NJ on March 15, 1932, she was the oldest of three daughters to Willard Hugh Hickok and Helen Gardner. They moved to Louisville in 1941 and she attended... View Obituary & Service Information

The family of Lois "Scottie" Hickok Allen created this Life Tributes page to make it easy to share your memories.

Lois &quot;Scottie&quot; Hickok Allen passed from this earth on July 21,...

Send flowers to the Allen family.