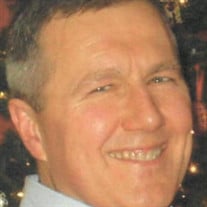 Lloyd Henry (Hank) Schildknecht, 72, passed away Monday, August 24, 2020 at home. He is survived by his wife of 47 years, Martha, his daughter, Anne Bogel (William), his son, Jim Schildknecht (Sarah); his brother, Ron Schildknecht (Flora); his grandchildren, Jackson, Sarah, Lucy and Silas Bogel, and Nick Schildknecht; and nieces and nephews. He was preceded in death by his father, Lloyd Henry Schildknecht, Sr., and his mother, Nona Burns Schildknecht of Mackville, KY. Hank was a graduate of the University of Louisville and University of Louisville Law School. He was a real estate attorney for over 40 years, and past president of Kentuckiana Real Estate Investors Association where he mentored new investors. He was a longtime member of the Louisville Boat Club, spending many happy hours on the tennis court. He made lifelong friends in his college fraternity, Tau Kappa Epsilon, and was a member of the Filson Club that fed his love of Kentucky history. Hank was also a longtime member of the German American Club, where he and Martha could frequently be spotted on the dance floor doing the polka. He was a member of Southeast Christian Church. Hank loved Kentucky history, baseball, German beer, his family, and trips with Martha and their kids and grandkids, including 15 years of family beach vacations to Destin. Hank was patient, kind, ethical, and generous. He will be missed by his many friends and family. Funeral Service and burial will be private. Visitation 4-7 PM Friday at Pearson’s 149 Breckenridge Lane. Per CDC guidelines, please wear a mask and maintain social distancing. Expressions of sympathy may be made in his name to Hillsdale College, designated to the Henry and Martha Schildknecht Endowed Scholarship, Institutional Advancement, 33 East College Street, Hillsdale, MI 49242, or to U of L Baseball, Attn: Dugout Club, 215 Central Avenue, Louisville, KY 40292.

The family of Lloyd Henry (Hank) Schildknecht created this Life Tributes page to make it easy to share your memories.

Send flowers to the Schildknecht family.