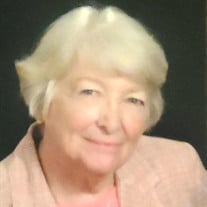 Linda “Kay” Williamson McArthur died on February 16, 2022 after a brief illness. She is survived by her loving husband of nearly 60 years, James “Scotty” McArthur; sons, James B. McArthur, III and David W. McArthur; brother, Dr. Jerry Williamson (Lynn); granddaughters, Helen F. McArthur and Katherine L. Claiborne; several nephews and nieces. She is preceded in death by her parents Olan Maxwell and Verdine Hooker Williamson of Loudon, TN. Linda was born in Mt Vernon, IL and raised in Loudon, TN. She was a graduate of Middle Tennessee University (1959). She worked as a teacher, technical writer and book editor before dedicating her life to her family, raising two troublesome boys. She loved being an aunt and delighted in being a grandmother. Linda was a member of the Second Presbyterian Church and was an elder who served in her church at parish, presbytery and national levels for the PC(USA). In 1991 she served as Moderator of the Presbytery of Mid Kentucky and led the committee responsible for the General Assemble PC(USA) being held in Louisville in 2001. She and her family moved to Louisville, KY in 1976 and was deeply involved in many aspects of the community including board roles for Cabbage Patch Settlement House, Bellwood Home for Children, Dickens on Mainstreet (now Light Up Louisville) and the Presbyterian Community Center. Linda enjoyed attending the Louisville Orchestra, singing and writing music, traveling the world and entertaining many friends and family at home. Her table was always one where people were nourished with conversation, amazing food and gracious hospitality. A memorial service and celebration of her life will be held at 2:30 p.m., Saturday February 26th in the Sanctuary of Second Presbyterian Church, 3701 Old Brownsboro Road, 40207 with a reception to follow. Visitation with the family is at 2:00 p.m. In lieu of flowers donations may be made to the Chapel Fund at Cedar Ridge Camp (4010 Old Routt Rd, Louisville, KY 40299). Arrangements under the direction of Pearson's, "Where Louisville Goes To Remember".

The family of Linda "Kay" Williamson McArthur created this Life Tributes page to make it easy to share your memories.

Send flowers to the McArthur family.