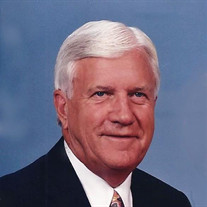 Leonard Kaufman, 90, of Louisville, KY died comfortably at his home on September 15, 2019. Born 1929 and raised in Valley Station, he was the son of Mamie Raggard Kaufman and Ben H. Kaufman. He was a graduate of Valley High School. Leonard’s employment at the Stock Yards Bank and Trust Company began in 1947 and spanned 45 years. He began as a teller, worked in the installment loan department, and rose to Vice President, President, and Chairman of the Board. In his lifetime Leonard served on many Boards: Chairman at the Louisville Convention and Visitor Board, Boy Scouts, and Derby Festival Committee among others. He was a Deacon and an Elder at Douglass Boulevard Christian Church for many years before transferring membership to Beargrass Christian Church. He was a natural athlete, and an avid golfer, playing as a member at Big Spring Country Club for decades. For many years he also enjoyed memberships both at the Pendennis Club and The Pyramid Trust. Leonard and his wife enjoyed their worldwide travels for decades. Upon retirement he learned to fly a recreational plane, an accomplishment that he enjoyed sharing with others. Leonard made friends easily wherever he worked, volunteered, or traveled. He was a man of generosity and humility. He is preceded in death by his beloved wife of 68 years, Ann Sanders Kaufman, his brother James C Kaufman, and sister, Mary Belle Tabor. He is survived by his daughters; Sharon Asfahl (Don), Barbara Potts (Jim), Janet Lee Kaufman, his brother Charles W. Kaufman (Delores), his grandchildren; Melissa Robich (Mark), Jeffrey Asfahl (Abby), Margaret Orlov (Lev), his great grandchildren; Chloe, Channing, Julia, and future great grandson. Visitation will be held on Monday, September 23rd from 12:00 pm until 2:00 pm at Pearson Funeral Home, 149 Breckinridge Lane, with service to follow at 2:00 pm. Burial at Cave Hill Cemetery will be private. Expressions of sympathy may be made to Hosparus Health or the Red Cross.

Leonard Kaufman, 90, of Louisville, KY died comfortably at his home on September 15, 2019. Born 1929 and raised in Valley Station, he was the son of Mamie Raggard Kaufman and Ben H. Kaufman. He was a graduate of Valley High School. Leonard&#8217;s... View Obituary & Service Information

The family of Leonard Kaufman created this Life Tributes page to make it easy to share your memories.

Leonard Kaufman, 90, of Louisville, KY died comfortably at his...

Send flowers to the Kaufman family.