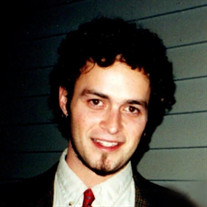 Lee Emerson Tyler, 45, passed away Saturday, October 9, 2021. He was born in Jackson, Tennessee on February 18, 1976 to Terry Welby Tyler and Dr. Karen Jones Ervin. As a child, Lee was known as a wise “old soul,” always sensitive and in touch with others’ feelings. He was a natural athlete enjoying soccer, tennis and golf, but his greatest interest was music and playing guitar. He graduated from Walden High School in 1994. Lee leaves behind his father, Terry Welby Tyler and stepmother, Amanda Foard Tyler. He was preceded in death by his mother Dr. Karen Jones Ervin and his older brother Terry Welby Tyler, Jr. He is also survived by his sister, Dr. Courtney Tyler Shearer (Shay), his half-brother, William Chester (Chet) Ervin, his stepfather, Gary Lee Ervin, nephews Logan and Baylor Shearer, niece Eloise Shearer, uncles, aunts and twelve loving cousins. Visitation will be 4-6 PM on Friday, October 22 at St. Francis in the Fields Episcopal Church, 6910 Wolf Pen Branch Road, Harrods Creek, KY, 40027. The funeral service will be held on Saturday, October 23 at 10 AM at St. Francis in the Fields. In memory of Lee, donations may be made to St. Francis in the Fields Episcopal Church or to Loaves and Fishes at 500 East Caldwell Street, Louisville, KY, 40203.

The family of Lee Emerson Tyler created this Life Tributes page to make it easy to share your memories.

Send flowers to the Tyler family.