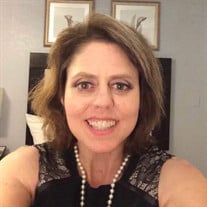 Laura Ann Larkin, age 53, of Louisville passed away after a courageous battle with cancer on Monday, June 8, 2020. Laura was born April 27, 1967 in Louisville. Laura is survived by her mother, Marcia Hasenour Larkin, her sisters, Lisa Larkin of Carlsbad, CA and Karin Larkin Kula of Nashville, TN, a nephew, Ryan Larkin, and a niece, Kara Larkin both of Carlsbad and aunts, Teri Hasenour Gordon, Franklin, TN and Janet Larkin Thieman, Wilmington, N.C, and many cousins. She was preceded in death by her father, William Michael Larkin. Laura was a 1985 graduate of Sacred Heart Academy. She graduated summa cum laude from Eastern Kentucky University in 1989 where she was a member of the Alpha Gamma Delta Sorority and the University of Kentucky School of Law in 1992. While at Eastern Kentucky University Laura was chosen as an intern for Senator Mitch McConnell. After law school she worked as an assistant Commonwealth Attorney in Jefferson County, Kentucky. At the time of her death she was an attorney for the Commonwealth of Kentucky Department of Insurance. In her free time Laura enjoyed movies, reading, ballroom dancing and always loved attending the Kentucky Derby with her friends. Laura was a member of the Epiphany Catholic Church, Toastmasters and also spent time volunteering at the Kentucky Humane Society. She was a friend to all at Gilda's Club. Laura will be truly missed by her family and friends. Funeral mass will be at Epiphany Catholic Church, 914 Old Harrods Creek Road on Thursday, June 11, 2020 at 11 a.m. Visitation will be from 10 a.m. until time of the service at the church on Thursday. Because of the current restrictions a Celebration of Life will be scheduled at a later date. Burial will be private at Calvary Cemetery. In lieu of flowers, the family requests that memorial gifts be made to the Gilda's Club of Kentuckiana, 2400 Grinstead Drive, Louisville, KY 40204 or the Kentucky Humane Society.

Laura Ann Larkin, age 53, of Louisville passed away after a courageous battle with cancer on Monday, June 8, 2020. Laura was born April 27, 1967 in Louisville. Laura is survived by her mother, Marcia Hasenour Larkin, her sisters, Lisa Larkin... View Obituary & Service Information

The family of Laura Ann Larkin created this Life Tributes page to make it easy to share your memories.

Laura Ann Larkin, age 53, of Louisville passed away after a courageous...

Send flowers to the Larkin family.