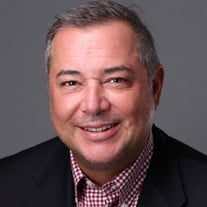 It is with deep sadness that we announce the passing of Kent Lamar Helms, on June 20, 2020, at 51 years of age. Kent was a loving father, a loyal son, a beloved brother and uncle, and friend to whomever he met. Born November 12, 1968 in Pittsburgh, PA, having lived in New Jersey, New York City and Alabama, he called Kentucky his home for the last 17 years. Kent spent his formative years in Ridgewood, NJ, where he trained in the art of outmaneuvering his parents and teachers. Subsequently, he attended the University of Alabama, Tuscaloosa and there he learned to roll more than the tide. While testing the limits of a pub tab, Kent went on to graduate from New York University. For the next 10 years, Kent resided in the Big Apple, where he met and married his former wife, Rachel Ryan Lee. During this time, Kent founded several small businesses, including a medical coordination company and a virtual art gallery. Thereafter, Kent & Rachel moved to Prospect, KY in 2002, where he joined Turning Point Brands. Most significant to Kent’s life and legacy, was the birth of Olivia Grace on June 9, 2005, who he cherished with all his heart. Kent is survived by daughter, Olivia Grace Helms (15), his father, Thomas F. Helms Jr. (Lisa Jordan), mother Donna Marinelli Helms, brother Thomas F. Helms III (Alicia) and his five nieces, Isabella, Ava, Sophia, Michela and Eliza. To say Kent lived a full life would be an understatement. For Kent, every day was an adventure, with frequent travels throughout the country, where he had ‘buddies’ at every stop. Kent took great pride and joy in developing his current business venture, Exacta Care. He was an avid tennis player, and golfer, who could be frequently found on the course at Wildwood Country Club. Kent always approached everything he did with a glass full (and never half empty) mentality. A visitation will be held Monday, June 29, 2020 from 4:00 - 7:00 pm at Pearson’s, 149 Breckenridge Lane. Due to limited seating capacities, a memorial service in celebration of Kent’s life will be held only for immediate family the following day. In lieu of flowers, donations in Kent’s name to the Ovarian Cancer Research Fund (OCRF) is greatly appreciative. “Every good gift and every perfect gift is from above, coming down from the Father of lights with whom there is no variation or shadow due to change.” James 1:17 https://www.tributeslides.com/tributes/show/W9GD5GJ94D6TPR85

It is with deep sadness that we announce the passing of Kent Lamar Helms, on June 20, 2020, at 51 years of age. Kent was a loving father, a loyal son, a beloved brother and uncle, and friend to whomever he met. Born November 12, 1968 in Pittsburgh,... View Obituary & Service Information

It is with deep sadness that we announce the passing of Kent...