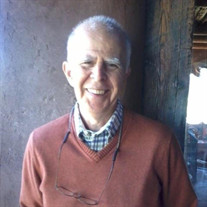 On April 21, 2020, Ken Norwood Middleton suddenly died at his home in Louisville, Kentucky. Born and raised in Roanoke, Virginia, he was preceded in death by his parents, Norwood Cronk Middleton (2/1/2004) and Lucille Hood Middleton (9/11/2008). Ken is survived by his wife, Sarah Lewis Middleton, two stepchildren, Brian Wesley Lewis and Margaret Elizabeth Lewis, and his brother, David Lynn Middleton. In Ken’s youth, he was an Eagle Scout with two Palms and started a newspaper at his high school. He graduated with his B.A. from University of Virginia. He earned an M.A. in Communications from American University, where he was awarded a full fellowship. He was awarded Teacher of the Year at Andrew Lewis High School in Salem, VA. As part of the Rotary Club of Louisville, he was awarded Rotarian of the Year 2013-2014 and Service Above Self in 2013. Ken was a proud veteran of the Vietnam War. Ken’s career was filled with meaningful and exciting work. He used his keen intellect, gracious people skills, and managerial excellence to help others succeed. He was a reporter in Virginia, an assistant news director in Charlotte, NC; Hartford, CT; Washington, DC. Then was a news director in Tampa, FL, and again in Charlotte, NC. He became the President and General Manager of WHAS-TV in Louisville from 1997-2000 after serving in the same role at KMSB-TV in Tucson, AZ, from 1993-1997. He also served as Vice President, Operations, and Support Services for the National Center for Family Literacy in Louisville from 2001-2006. Ken finished his career as President of Middleton Consulting, helping businesses and nonprofits tell their story to their customers and donors. Ken loved community involvement and did so through serving as an elder and teacher at his church, Second Presbyterian Church, and through several significant roles for Rotary Club of Louisville, including the Board of Directors, 2013-2015. He served his community through several different organizations Encore Louisville, Volunteers of American Mid-States, Kentucky Derby Festival, and Metro United Way. Ken loved to travel and go on trips with his family. Some of his explorations included China, Kenya, the Caribbean, Thailand, Australia, Canada, and much of Europe and the United States. Ken cared deeply and genuinely about others and modeled thoughtful, gracious servanthood to his family, friends, those he worked with, and his community. He will be greatly missed. Memorial and funeral services are pending and will be announced at a later date.

On April 21, 2020, Ken Norwood Middleton suddenly died at his home in Louisville, Kentucky. Born and raised in Roanoke, Virginia, he was preceded in death by his parents, Norwood Cronk Middleton (2/1/2004) and Lucille Hood Middleton (9/11/2008).... View Obituary & Service Information

The family of Kenneth Norwood Middleton created this Life Tributes page to make it easy to share your memories.

Send flowers to the Middleton family.