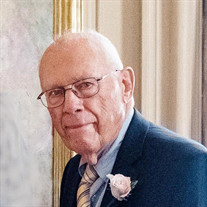 Keith E. Davis, 99, a long-time resident of Glenview, Kentucky, passed away Monday, September 7, 2020 following a brief illness. He was a resident of Jefferson Place Rehab and Wellness Center at the time of his death. Keith was born on November 20, 1920 in the rural farming community of Mahomet in central Illinois, the son of Frank Edward and Ada Louise Maxwell Davis. Keith’s life was marked by devotion to his family, professional achievement and service to his country and community. Keith married Norma Richter on September 16, 1950 in LaGrange, Missouri. He was preceded in death by his parents, two brothers, John and Dean, and sister, Elizabeth. Keith is survived by his wife, Norma, three children, Robert, Glenn and Elizabeth Davis (John Blaser), eight grandchildren and several nieces and nephews. Keith received his Bachelor of Education in 1943 from Illinois State Normal University and his Master of Arts in 1947 from State University of Iowa. Keith interrupted his education to proudly serve his country in World War II in the south Pacific as an officer in the United States Navy. Keith participated in numerous major battles in the Pacific and served with the United States’ occupying forces shortly after Japan’s surrender in 1945. He was honorably discharged on July 31, 1946. Following his service in the war, Keith completed his education and taught at the University of Missouri at Columbia where he met Norma. He continued his career as a Certified Public Accountant at Ernst & Young in Chicago and later at Black, Sivalls & Bryson in Kansas City, and then at Glenmore Distilleries in Louisville. He retired as Chief Financial Officer of Glenmore in 1985 after 20 years of service. Keith was active in numerous civic organizations during his lifetime including as a member of the board of directors of the Kentucky Mountain Laurel Festival, Jewish Hospital & St. Mary’s Foundation and the Kentucky Chamber of Commerce where he served as President. He also volunteered with the Boy Scouts of America for over 30 years, serving as leader of Troop 317 at Christ Church United Methodist in Louisville. He was a member of Christ Church United Methodist at the time of his death. The Old Kentucky Home Council of the Boy Scouts of America (predecessor to The Lincoln Heritage Boy Scout Council) honored Keith by awarding him the Silver Beaver Award for his hard work, self-sacrifice, dedication, and many years of service. Keith was a long-term stock market investor, having purchased his first share of stock at age 21. During his lifetime, he was also an enthusiastic bridge player and square dancer as well as an avid golfer, tennis player and fisherman. He especially enjoyed mowing his yard on his Cub Cadet lawn tractor before he moved to Jefferson Place. Keith embraced everything Kentucky – University of Kentucky basketball, the Greatest Two Minutes in Sports (Kentucky Derby), and good food. The family wishes to thank the kind and thoughtful staff at Jefferson Place for the love and care they showed Keith as well as Linda Rigdon, RN, and Dr. Thomas Tu. A memorial service to pay tribute to Keith will be held at a date in the future when it is safe for everyone to gather in his memory. Burial will be in Dover Cemetery, LaGrange, Missouri. To express your sympathy please consider making a tax-deductible donation in Keith’s memory to Baptist Health Foundation Greater Louisville or The Lincoln Heritage Boy Scout Council

Keith E. Davis, 99, a long-time resident of Glenview, Kentucky, passed away Monday, September 7, 2020 following a brief illness. He was a resident of Jefferson Place Rehab and Wellness Center at the time of his death. Keith was born on November... View Obituary & Service Information

The family of Keith E. Davis created this Life Tributes page to make it easy to share your memories.

Send flowers to the Davis family.