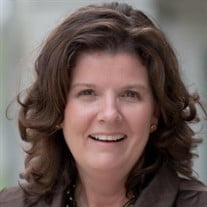 Karen Ann Hoffman Wunderlin, 65 of Louisville, Kentucky passed away unexpectedly on February 15, 2022, in Snowmass Village, Colorado. She leaves to cherish her memory her partner, Mark Otten of Indianapolis, Indiana; her mother, Joan Hoffman of Prospect, Kentucky; her children, Julia Desmond Wunderlin, recently wed to Alex Miramontes of Chicago, Illinois, and Edward Nelson Wunderlin of Louisville, Kentucky; and her sister and brothers, Patty Hoffman Clark of Louisville, Kentucky, Thomas Nelson Hoffman (Sarah) of Santa Barbara, California, Robert Hill Hoffman (Lauren) of Carlsbad, California, and Kenneth John Hoffman (Susan) of Prospect, Kentucky. Karen was also a favorite aunt to a host of nieces, nephews, great-nieces, great-nephews, extended family, and friends to cherish her loving memory forever. Karen was an amazing woman, generous with her love and gifts, sharing her joy of friendship and life with everyone. She was born in Norfolk, Virginia, on June 12, 1956, to Joan Dutcher Hoffman and the late Nelson Hoffman. Karen gleefully welcomed her siblings Patty, Tom, Bob, and Ken as they were born in the next five years. The Hoffman Bubs, our nickname, moved every few years, making homes in Delaware, Pennsylvania, Indiana, New Jersey, and California. Karen was an excellent student and an enthusiastic reader who had many talents and interests – she could sing, act, sew, swim, lead and organize. She always contributed her skills to the communities she joined. Karen was also an avid athlete and gardener. She joined (and usually led) a book club for over 30 years and a Women's breakfast club. Most recently she enjoyed multiple international biking trips, ski adventures, and annual vacations with her family. Karen received her Bachelor’s degree in Political Science and her MBA from the University of North Carolina at Chapel Hill. She was a member of Phi Mu sorority and worked at Spankie’s Bar. Karen took time off from UNC to work on the Ford-Dole presidential campaign in 1976. She moved to Louisville in 1980 and began a 12 ½ year career at GE. Karen married David Wunderlin in 1984. Their two children, Julie and Ed, were born and raised in Louisville, enjoying activities, adventures, and trips with Karen and David. Christmas caroling with the Wunderlins was annual enchantment. In 1992 Karen formed The Wunderlin Company, an organizational change consulting group. She led that organization for 30 years, working as a facilitator, coach, and change management leader for numerous organizations in Louisville and around the world. She was peerless in her field, and her skill as a facilitator seemed like a natural extension of her positive and curious personality. Her influence and care for her community are visible in so much of Louisville’s improvement and aspiration, from city government to our largest businesses, from West Louisville to the Parklands of Floyds Fork, and to the Little Library in her front yard that knits together a neighborhood. Her career allowed her to pursue what she loved, and to prioritize her role as a mother, friend, and family member. She used her gifts as a mentor to many, including her daughter who joined the company in 2020. Mark Otten has been Karen’s loving partner for over 5 years, sharing their home, daily life, Mark’s family and grandchildren, and his dog Bella (RIP). The summer of 2021 trip took them north and west across the US, exploring national parks and visiting friends and family along the way. Karen’s sense of possibility was contagious. Her energy and joyful intensity lifted us up and made us better. Visitation will be held at Pearson’s Funeral Home on Thursday, February 24th from 3-7pm. A mass celebrating Karen’s life will be held at Epiphany Catholic Church, 914 Old Harrods Creek Rd. Louisville, KY 40223 on Friday, February, 25th at 11am. In lieu of sending flowers, the family requests you make a donation in Karen’s honor to La Casita Center or the Parklands Foundation. Arrangements under the direction of Pearson's, "Where Louisville Goes To Remember".

The family of Karen Ann Hoffman Wunderlin created this Life Tributes page to make it easy to share your memories.

Send flowers to the Wunderlin family.